You are here: Home / News / News / Forces bride pays tribute to her late husband and dedicates her wedding day to the charity that has supported her children since his death 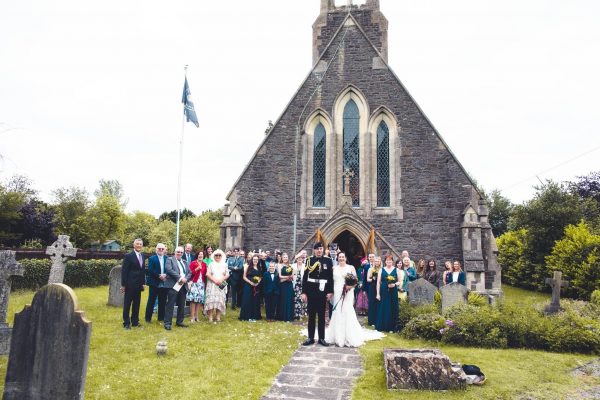 As Mr and Mrs Smith tied the knot at their local village church in Gloucestershire, they beamed with joy. After so much sadness in her life, Rachel certainly deserves her happy ever after.

When Rachel was told on 7 January 2007 that her husband, Lance Corporal John Murphy, had taken his own life, she thought she and her young children Steven and Emily, who were just three and two years old, would never find happiness again.

14 years on, Rachel has found love and Steven (now 18) and Emily (now 16) have welcomed Martin into their lives. However, life has been incredibly difficult for Rachel and her children. Experiencing the death of their dad at such a young age and trying to come to terms with the fact he took his own life has had a dramatic impact on Steven and Emily, most notably on Steven, who has had to battle his own mental health problems.

Rachel met Martin, who is an Army PTI, in 2013 and he has been a large part of the children’s lives as they’ve grown up. He’s been there to support them through their grief, often comforting them and answering questions surrounding their dad’s death.

Over the past eight years, Martin has been Rachel’s rock, and on 19th June, the pair married at an intimate ceremony held at their local village church in Gloucestershire.

It was important to them that John, who served for 16 years with the Royal Army Veterinary Corps, was part of their day. It was a military wedding and Steven wore his dad’s medals with pride, while Emily wore her mum’s Elizabeth Cross Flower of Remembrance pin. The wedding day was dedicated to Scotty’s Little Soldiers, the charity that supports children and young people who have experienced the death of a parent, and has been a huge part of Steven and Emily’s lives.

“It was Martin’s idea to involve Scotty’s in the day,” said Rachel. “He knows how much it means to Steven and Emily. We’ve been together for eight years so he’s seen the Scotty’s journey and knows what the charity means to them.

“Scotty’s has always been there, every birthday, anniversary, Remembrance Day, they make the children feel like they are not alone. Scotty’s provide fun things and they provide grants, but for me, the most important thing Scotty’s provides is emotional support to children. It really is specialist because Scotty’s get it, they get right to the heart of it and they get the right people to see the children in a matter of weeks, which is just what we needed. Over the years the charity has been incredible with providing emotional well-being support to Steven, who as a teenager really struggled with his mental health and in coming to terms with why his dad did what he did. We wouldn’t have got through this dark period without Scotty’s.”

To signify the importance of Scotty’s Little Soldiers to Rachel, Martin, Steven and Emily, the Scotty’s flag was flown at the church throughout the ceremony and a Scotty’s gazebo was outside the church. The invitations that were sent to wedding guests were in Scotty’s colours, yellow and black, and instead of presents, Rachel and Martin asked for donations to the charity.

The couple were only able to invite 30 guests to their wedding due to Covid restrictions, but they still raised an incredible £1700 for Scotty’s, which will help bereaved Forces children and young people like Steven and Emily.

“The Swan in Thornbury provided our catering and when they heard we were donating funds to Scotty’s, Sandra Davies, who runs the business, took some money off the bill as a donation. I was really touched,” said Rachel.

Scotty’s Little Soldiers was set up by Army widow, Nikki Scott, in 2010 after her husband, Corporal Lee Scott, was killed in action in Afghanistan in 2009, leaving behind two young children – Kai was 5 and Brooke was just 7 months.

The charity is currently providing assistance to hundreds of bereaved Forces children and young people around the UK, aged 0-25, and services offered include guidance to parents and carers, access to professional child bereavement support, personal education and learning assistance (including grants) and fun activities such as holiday respite breaks and group events. These are all designed to remind the children and young people supported by Scotty’s that they are not alone.

“it was fantastic from beginning to end. I’m still pinching myself,” but she admits that when her husband took his own life in 2007 she never thought she could be this happy.

“I remember after John died someone telling me that things would never be the same again but that I would learn to live with it and cope with it. I didn’t believe it at the time, but it’s right. Grief is a weird thing. You can be two weeks down the line, two years, twenty years, and something will come and bite you. Music, food, something on the telly, even an expression on one of the kids’ faces. Suddenly it all comes flooding back, but you develop an amazing coping mechanism.

“You can move on, you can learn to live again and it’s okay to love again. When you are a widow, particularly a war widow, you feel in the spotlight and everyone is interested in what you do or has an opinion. I didn’t know what people would think when I started dating Martin, but I believe that if you find happiness again, you should grab it because you only have one life to live.”

Despite finding love again, John will always be in Rachel’s heart and he was very much present on the day.

“Our photographer, Beth Wood, who used to be a Scotty member before she turned 25, took a lovely picture of the wedding bouquets on John’s memorial bench that is in our garden. We also have a picture of Steven wearing his dad’s medals, standing with his godfather, who was John’s best friend. It brings me to tears every time I look at it, but I’m glad John could be involved, in some way, in the day, and incorporating Scotty’s meant a lot to us all. I think it helped to reassure Steven and Emily that even though I am married again their dad won’t ever be forgotten.”