In 1947, the National Service Act was introduced that required all healthy males aged 18 or over to serve 18 months in the British armed forces. In practice National Service was a catch-all for men born between 1927 and 1939 whose childhoods had already been blighted by economic depression, wartime bombing and evacuation. Although its abolition was announced in 1957, it continued until 1960, and the last conscripts were not “demobbed” until 1963. These young men, most of whom were too young to vote were trained to police regions occupied by the British after the war, to provide a reserve of troops who could be called up in any future major conflict, and they were available for immediate deployment. 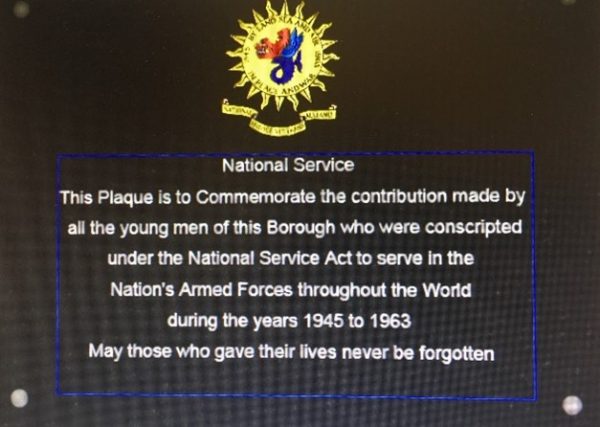 However in 2021, the last living members of the 2.3 million young men who were conscripted in those 16 years, now in their 80s and 90s have largely been forgotten by the politicians who stated in March 1952 that “National Service is essential to enable the Active Army to meet the commitments of the Cold War”. Today there are just a handful of listed, dedicated memorials to commemorate their service and sacrifice.

But the NSVA has announced this week that they have launched a campaign to rectify this appalling omission.

This campaign, running on two levels, is designed to raise £5000 to purchase and erect a number of Memorial Plaques (draft copy attached) to be positioned in public spaces like shopping malls, memorial gardens and town centres where these young men were conscripted, trained and served throughout most of Great Britain.

Level One: This element of the campaign relates to a 100 mile wheelchair journey undertaken by an 82 year old NSVA member, Mike Homer to illustrate how few Memorials there are in our Country. Mike, will start his challenge in Fareham at a known National Service memorial and travel, using only public transport to the next nearest NS memorial at Princess Risborough a distance of about 100 miles. Mike leaves on an early bus from Fareham on 17 May and the NSVA will attempt to record his journey on our Just Giving Crowdfunding page. We expect that several local politicians and dignitaries will meet with Mike on his lengthy and difficult journey.

Level Two: The second element consists of the Just Giving page noted above and a video on YouTube. Links to both these are shown below.