Former Royal Air Force Senior Aircraftman Dean Mills has been serving on the Coronavirus frontline after being called up to help in a major hospital’s Intensive Care Unit (ICU).

The 49-year-old Blesma Member, who left the forces after a serious climbing accident, has been working 13-hours shifts with up to 11 hours spent in full protective gear and face mask. 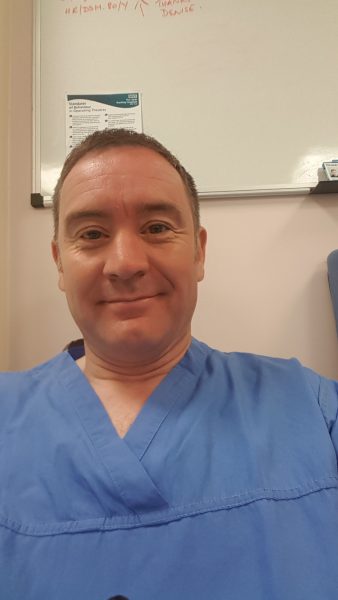 Dean, who was in the RAF for ten years, is now a key ICU team member at St. James’ Hospital in Leeds, a regional centre for treating Covid-19 patients.

“It has been very tough. We have lost some people but, thankfully, seen lots go back to their families,” he says. “We do our best every shift and the professionalism here is outstanding.

“We work as a team so it is like being back in the forces. I look after my lot and they look after me. We make sure we have the right Personal Protective Equipment (PPE) on and help each other.

“There is also a huge sense of pride in what we do.”

Dean was working at the hospital’s Theatres department as a perioperative assistant nurse when he was called up to the Covid wards to join the effort to cope with a surge of seriously ill patients as the virus spread around the nation.

“There is an intensity to it which is draining and being in the PPE is hot and exhausting. It is not nice and you feel claustrophobic and, at times, it is scary for some people.

“But help is there if we need it and we all keep each other’s spirits up. I’m a bit of a joker so have a laugh and help keep morale up. I’m originally from Kent so there is a bit of banter about soft Southerners with some of the patients here.

“It is good to lighten the mood and have personal contact when you can. Again, it’s like the forces in that you have bad days and good days and have a laugh where possible.

“But we all know that this is a serious job and how important it is to people to know their loved ones are in safe hands.”

Dean, who is chairman of the Royal Air Force Association in Batley, enlisted from school and was on a mountain rescue training mission when he fell down a crevasse in Wales and suffered severe injuries to his left leg and hands in 1993.

He then worked as in the civil service as an IT specialist and joined the International Rescue Corps, which runs missions to disaster zones around the world, where he developed an interest in medicine and decided to join the NHS.

“It took me 18 months to rehabilitate after the accident but I had to leave the service which I found very difficult,” adds Dean. “It was a big adjustment because the RAF was my life at the time.

“I was always interested in the medical aspect of search and rescue so I decided to retrain to become a nurse, which is ongoing.

“The leg is a bit of an issue and I’ve thought about amputation at times but I also think I’m luckier than a lot in that I still have some use of it.

“The shifts can be tough but we want everyone to know that we are coping. We want people stay at home as instructed because we are getting ICU beds empty and we don’t want to fill them up again.

“The message is stay at home; you don’t want to be in an ICU bed. If you do, you are also helping saving lives. We all want to go back to our normal roles as soon as possible.”