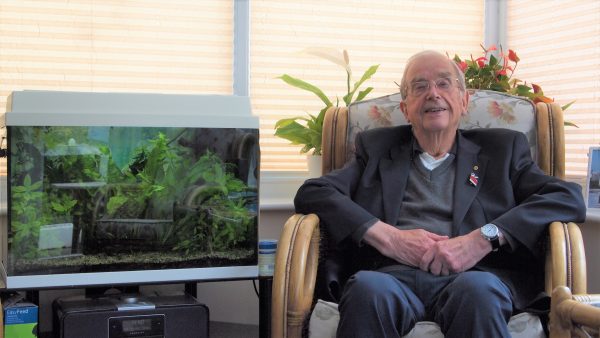 90% of Blind Veterans UK’s 5,000 beneficiaries are over 70 and thus being advised by the Government to self-isolate. Their telephone befriending service is critical to maintain the mental well-being of the vast majority of the veterans who they support.

“Not leaving your home for such a long time will take a toll on anyone so I’m delighted to support Blind Veterans UK in the fantastic work they’re doing providing companionship to visually-impaired ex-Service men and women during these testing times.”

One of the blind veterans who Ryan has spoken with is 84-year-old Army veteran from Sudbury in Suffolk, Clive Stott. Sports fan and former rugby coach Clive was delighted to receive the call. He says:

“What a great experience it was chatting with Ryan. I’m a big rugby fan but over the years all the law changes have had me flummoxed. It was brilliant to have them explained by not only a superstar but also a very charming and nice chap.”

“Since my sight loss I’ve had to give up a lot of hobbies but I’ve always maintained my love of rugby. I’m so grateful to Blind Veterans UK for providing me with such a fantastic experience.”

Clive was called up to the Royal Dragoon Guards in 1954 where he completed his national service as Tank Crew. It was later in life at the age of 54 that he was diagnosed with Glaucoma which has caused a deterioration in his sight ever since.

Luckily, in 2015, Clive found out about Blind Veterans UK, who have been supporting him since then. He says:

“The charity have been fantastic. Not only have they trained me up on equipment like a magnifier which has given me the independence to read the newspaper and post by myself, but I’ve also met a whole host of people in exactly the same position as myself at events in the community.”

He continues: “It so reassuring to know that Blind Veterans UK are only a phone call away and that they’ll do whatever it takes to help me out with whatever I’m up against.”

Nicky Shaw added: “There is so much that we can and must do to support blind veterans to help them maintain physical and emotional wellbeing, and to feel safe, reassured and cared for during this crisis.”