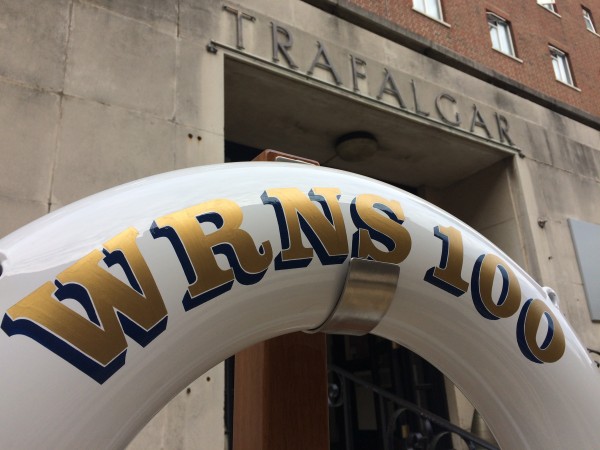 Naval Servicewomen and generations of former Wrens who served in support of the Royal Navy across the century gathered in HM Naval Base, Portsmouth at the end of September to celebrate 100 years since the Women’s Royal Naval Service commissioned in November 1917, during the First World War.

On the subject of women serving at sea, Cdr Stack said: “This is just normal business for us. When I became the Commanding Officer of HMS Duncan back in December last year, I was the ninth female officer to take command, it is completely normal for us serving at sea today.  To the Wrens who came her before she said: “Our progress and success in the RN today is based on your legacy. So it is very fitting that we are gathered here on board tonight to honour that legacy and what that represents in the modern Navy today.”

On the Saturday evening, 30 September, many more Wrens from multiple generations travelled across the country, to join servicewomen from Portsmouth-based ships, to celebrate their centenary at a WRNS100 Mess Dinner in the Warrant Officers and Senior Rates Mess at HMS Nelson.

Guest of Honour was the most senior female commissioned officer in the Royal Navy, Commodore Inga Kennedy, who proposed the rousing toast to the WRNS100 Centenary with her keynote speech, recounting the impressive timeline of achievements of women in support of, and as part of the Royal Navy to cheers from the women gathered.

The Commodore shared the top table with guest speaker, Sarah Ayton, a double-Olympic Gold medallist sailor, who spoke passionately of the determination and ambition of women today who achieve their dreams and who plan to succeed, overcoming many challenges.

A candle was lit for the duration of the Mess dinner by former Wren Bev Elston to remember “Absent Friends”.  Bev’s Grandmother, Vi Cornish (formerly known as Wren Violet Auchinleck had served in the WRNS during WW2.) Vi had left her home in Plymouth and her two small children with her mother (Jean) to join the WRNS.

HMS Nelson hosts Portsmouth’s Naval Barracks – the combined single living accommodation site for the Royal Navy, although in 1946 most Portsmouth-based Wrens were accommodated separated from their male counterparts at The Duchess of Kent Barracks, a former bombed-out building that once formed the Clarence Barracks (now the Portsmouth Museum) which had been re-constructed and subsequently became known by sailors and Wrens alike as ‘The Wrennery’.

The three servicewomen undertook the organisation of the WRNS100 September weekend events in the home of the Royal Navy in Portsmouth and were proud and delighted with the success and support for their WRNS100 celebrations.

A traditional raffle with plenty of generously-donated prizes from the local Association of Wrens, the WO & SR Mess, local businesses created much excitement and anticipation, while special souvenir gifts, Wren brooches, commemorative WRNS 100 coins were provided to every diner as mementos of this special occasion, generously gifted by WRNS BT/ Association of Wrens and Navy News.

On Sunday, 1st October, the Second Sea Lord, Admiral Jonathan Woodcock OBE and a congregation of Servicewomen and Wrens gathered in the gymnasium at HMS Nelson for a Sunday Service of celebration to mark the WRNS100 centenary.

Reverend Janice Honey-Morgan, one of only two serving female Chaplains in the Royal Navy travelled up from her parish at RNAS Culdrose in Cornwall to conduct the Sunday Service. Vice Admiral Woodcock’s address paid tribute to the women of the Royal Navy while a bible reading was read by Chief Petty Officer Photographer Sue Emery.  Petty Officer Carol Morton laid the wreath.

WRNS100 EVENTS  For those interested in finding out more about the many events happening around the country and beyond, there is a WRNS100 website on the link: www.wrns100.co.uk  or visit the RN website on: http://www.royalnavy.mod.uk/news-and-latest-activity/features/wrns100