Scotty’s Little Soldiers, the charity for bereaved Forces children and young people, is hugely grateful to Forces Support following their pledge to fund respite breaks for the families of servicemen and women who have lost their lives. 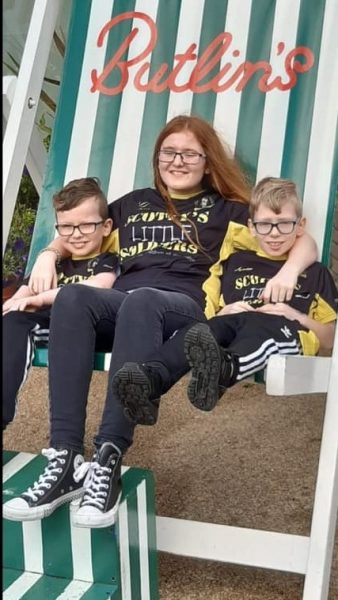 Forces Support, a UK bereavement and veterans’ charity, have shown their dedication to Forces families by providing Scotty’s Little Soldiers with funding to cover the costs of all their respite breaks for the whole of 2021. This enables children and young people, who have experienced the death of a parent who served in the Armed Forces, to get away and spend much needed time with their family. Furthermore, Forces Support will continue to provide funding to Scotty’s for the following three years, enabling 100 bereaved families to enjoy respite breaks each year from 2022 to 2024. Forces Support also plan to purchase a new lodge for Scotty families to use for years to come.

Scotty’s Founder, Nikki Scott, knows first-hand how important a respite break is for a family following the death of a loved one. In fact, it was when she went on holiday after the death of her husband, Corporal Lee Scott, that she had the idea to set up a charity to support bereaved Forces children.

Nikki’s cousin had convinced her to go on holiday, and it was on that break that Nikki saw her son Kai, who was five years old, laugh and smile for the first time since his dad’s death. Nikki realised there must be so many more children who had also experienced the death of a parent who served in the British Armed Forces but hadn’t had that opportunity to smile again. Scotty’s Little Soldiers was set up in 2010 and providing respite breaks for bereaved military children and their families was one of the charity’s priorities.

More than ten years on, Scotty’s is committed to supporting hundreds of bereaved Forces children and young people and provides a vast amount of support to its members, ranging from emotional well-being care, development opportunities through a range of activity and educational grants, events that connect bereaved Forces families to remind them they aren’t alone and gifts at extra difficult times of the year, but respite breaks remain at the core of the charity’s support.

Scotty’s currently owns six lodges, one of which was kindly donated by the Undentable Trust, and also arranges breaks away for its beneficiaries at Center Parks, Alton Towers and Butlins. In 2020, when lockdown restrictions eased, Scotty’s provided 177 members with a respite break.

“We are blown away by this hugely generous funding from Forces Support. There’s so much to deal with after the death of a loved one and being able to escape your daily life and have quality family time is invaluable. Respite breaks have such a positive impact.”

Nikki continued: “We really can’t thank Forces Support enough. This financial help not only enables us to ensure bereaved Forces families can have much needed respite breaks, but this funding also elevates a bit of financial pressure for the charity, following a very challenging year, meaning we can support our members in other areas as well. This funding will make such a difference. Thank you so much.”

“Forces Support is absolutely delighted to be helping fund the wonderful work of Scotty’s Little Soldiers, and to continue this partnership in years to come. Their work is extremely close to our hearts, and we are excited to see what they can achieve in the future.”