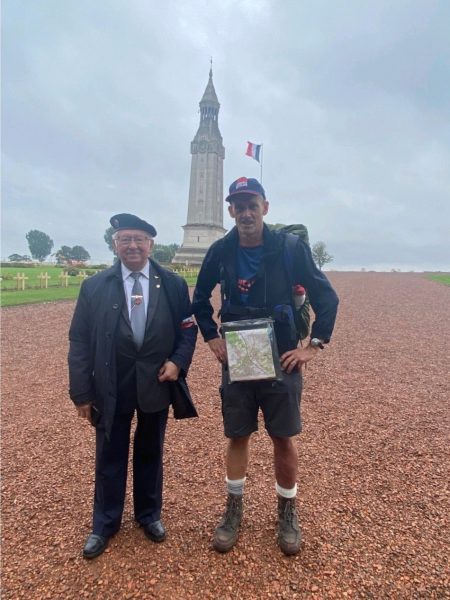 Setting off on 26 September, the 61-year-old, hailing from a service family, hiked just under 24 miles a day along the First World War frontline in recognition of the charity being founded in 1919 at the end of the conflict.

Having supported the charity for many years, Simon decided that following the withdrawal of British troops from Afghanistan, and with Armistice Day on the horizon, it was the right time to take on a physical endurance challenge to raise vital funds to support veterans turning to the charity for help.

“I have always felt that Combat Stress’ work is uniquely important, especially given everything that has happened recently. It’s always felt incredibly important to me to do my bit to help.

“I’m a keen hiker and, vaingloriously, I expected that the walk might get a little easier over the duration as I got used to being constantly on the road. But, of course, averaging 24 miles per day meant that you never fully recover overnight and so are progressively running yourself into the ground!

“The key landmarks I covered were Notre Dame de Lorette, Vimy Ridge, Thiepval and the Lochnagar Crater. Walking alone really gave me the opportunity to absorb my surroundings, listen and reflect. It was impossible not to be affected by the history of the area, from the cemeteries to the numerous monuments and museums, plaques and memorials.”

A particularly notable moment for Simon came on his drive back to Calais when he stopped to visit his great uncle’s grave in Voormezeele, Belgium, who was killed in 1915, aged 19.

Simon’s employer of 22 years, Brit Insurance, generously donated £2 for every £1 Simon raised, helping him to far exceed his target goal and reach £45,000.

“We’re extremely grateful to Simon for his efforts and to Brit Insurance for their generosity.

“To walk such a distance is an impressive feat, and to do so in a place that offers such a stark reminder of the legacy of war, and the reasons behind Combat Stress’ origins, adds a real gravitas to the challenge.

The money raised will help us to continue providing our specialist mental health services to veterans across the UK.”