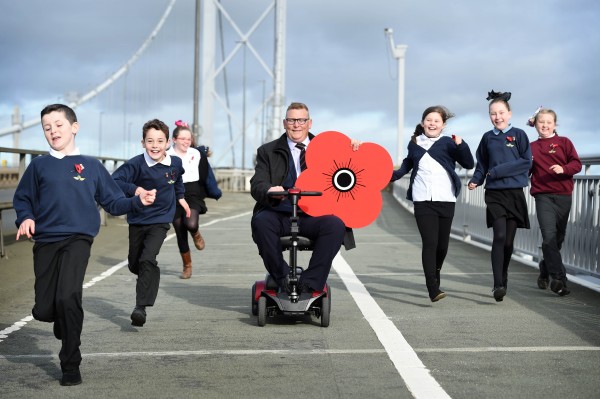 A veteran and Poppyscotland beneficiary was joined by primary school pupils at the old Forth crossing today to launch the 2017 Scottish Poppy Appeal.

Corporal Andrew McIntosh, 44, who served for 14 years with the 22nd Cheshire Regiment and saw service in Northern Ireland, Bosnia and The Gulf, is no stranger to doing his bit for the Armed Forces charity after he travelled from John O’Groats to Land’s End on his mobility scooter to raise £3,000.

Andy, from Strathaven, South Lanarkshire, was confined to a mobility scooter after being diagnosed with a very rare and serious vascular condition in 2009. Poppyscotland provided him with an electric-powered vehicle to give him more independence – and Andy was only too keen to show his gratitude.

Andy, who also met with Royal Highland Fusilier piper Joe Davies, from 2 SCOTS, explains: “After their help, I wanted to go the #ExtraMile for Poppyscotland and that’s why I took on the challenge from John O’Groats to Land’s End. I did it in 16 days and nine hours – breaking the record by eight days – and, after doing that, I’m sure people won’t mind me asking them to go the #ExtraMile for Poppyscotland this year. You don’t have to travel 1,000 miles like me; you can do anything you like that will help raise money for the charity.” 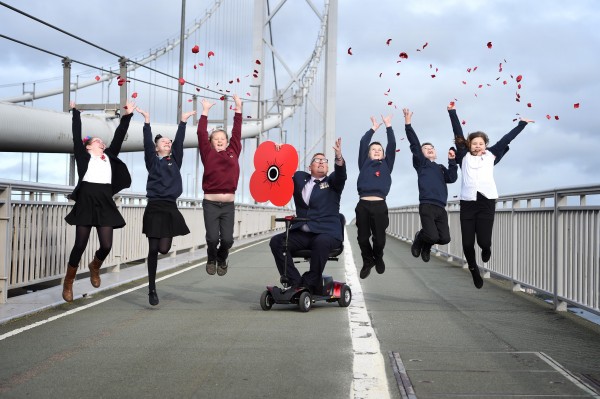 Andy was joined by the Uphall Primary School choir (age ranges P4-P6), in West Lothian, who went the #ExtraMile for Poppyscotland both literally and metaphorically after venturing across the Forth Road Bridge to raise funds for the 2017 Scottish Poppy Appeal.

Headteacher Carol Fawkes said: “The pupils of Uphall Primary School felt privileged and honoured to be invited to take part in the event today. They thoroughly enjoyed the experience and the opportunity of being part of such an important event, which remembers and supports the Armed Forces community living in Scotland.

“This was a perfect conclusion to our whole school project learning about Passchendaele. Furthermore, it has given our children an insight into how Poppyscotland provides support for those who are currently serving or have served in the Armed Forces.”

Gordon Michie, Poppyscotland’s Head of Fundraising, said: “Both Andy and the pupils of Uphall Primary School are no strangers at going the #ExtraMile for Poppyscotland. We know at the heart of the Poppy Appeal are our local communities, and the work this primary school has undertaken recently in respect of Remembrance epitomises what the Appeal is all about.

“I am delighted they have had the opportunity to meet one of our heroes in Andy who has not only served his country with great pride and distinction, but continues to support us daily by going that #ExtraMile with his fundraising activities. The Scottish Poppy Appeal generated £2.9 million last year and is the primary source of income for the charity which funds the life-changing support we provide for the Armed Forces community in Scotland.”

The Scottish Poppy Appeal is Scotland’s largest annual street collection. More than five million poppies and 60,000 collecting tins have been distributed around Scotland. Poppyscotland relies on a network of 450 volunteer area organisers and around 10,000 volunteer collectors who ensure that every corner of the country has their poppies in time for the Appeal.