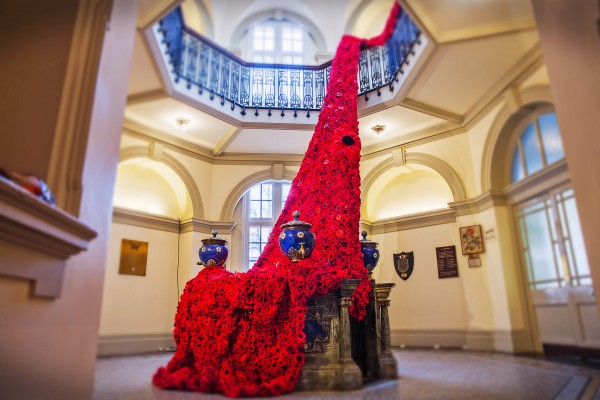 GCHQ and The Cheltenham Trust have joined forces to bring the giant ‘waterfall’ of over 9,000 handmade poppies, which helped to launch the Royal British Legion Gloucestershire County Poppy Appeal 2016, to Cheltenham Town Hall until April.

This also marks an exciting new venture for The Cheltenham Trust by using its five venues, including the Town Hall, to bring arts displays to unexpected places to support community projects. Located in the historic spa well area of the Town Hall where the spa waters were once pumped to the surface for its restorative properties, the poppies will stand from floor ceiling filled by the natural light of the stairwell.

“The GCHQ poppy waterfall is a stunning piece of art and made a moving backdrop to our 2016/17 Poppy Appeal launch so we’re delighted more people will now get the chance to see it at Cheltenham Town Hall.  Thanks to public support, in the last year The Royal British Legion has answered over 780,000 requests for help from the Armed Force community.”

The creation of the GCHQ poppy waterfall was very much a community effort, with staff, friends and family crafting 9,000 poppies as well as local schools, village “stitch and bitch” groups and a number of local WI branches. It’s fantastic that those in the community who contributed will now be able to visit the Town Hall to see the finished result and try to spot their poppies – and we hope they will bring and tell their friends about it too.

The poppy waterfall project helped take GCHQ’s annual total raised for the Royal British Legion Gloucestershire to over £19,500, through the sale of around 4,000 extra handcrafted poppies and other activities. The RBL supports all generations of the military family to live on to a more hopeful future. Just as their work to support the military never stops, neither does their fundraising. Donations are welcome any day of the year to help them reach their county fundraising target of £660,000.