To celebrate Women’s History Month, SSAFA, the Armed Forces charity is sharing some of the remarkable stories of women who have overcome adversity and are giving back to those who supported them overcome those challenges.

We have chosen Gemma Slaughter from Lincolnshire.

Flight Sergeant of Bespoke Languages, Gemma Slaughter, a SSAFA volunteer, has given up all her spare time during the pandemic to help serving personnel. Despite an intense job, where she frequently works nights, and managing a debilitating condition, fibromyalgia, she also carries out mental health first aid support to help people who are struggling. Despite being so young, Gemma has been through a lot, following the suicide of her mother and as a thyroid cancer survivor. She is an incredible woman who wants others to know there is support available from SSAFA when they need it. 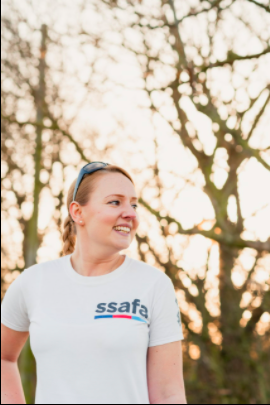 “I first got involved with SSAFA when I was posted to Lincolnshire a few years ago.”

“We wanted to renovate a Junior Ranks’ welfare facility on camp and approached the charity for some funds. They said they were happy to help but I then found out that their local tri-Station SSAFA committee didn’t have any representation from my Station, so I volunteered to be a representative. It was my way of saying thank you for making the renovation happen. Then I was hooked.

“Since then I have been actively involved in volunteering and fundraising – from representing SSAFA at air shows, to holding annual collections at our Station bonfire and recruiting 100 people to take part in a 1,000 mile challenge which raised more than £5,000.

“I’ve never given up yet”

“The next big challenge is 85 kilometres of treks in Banff National Park in Canada, which was also established in 1885. My husband and I will be walking through the Valley of the Ten Peaks, with a fundraising target of £1885, but of course we don’t mind if we go over!

“We’re doing 8 treks over 5 days and we’ll do our last stretch at Lake Louise which is 1,885m above sea level.

“This challenge is going to be particularly difficult for me because I suffer from a chronic pain and fatigue condition called Fibromyalgia. I’m in pain every second of every day and my energy levels are drastically affected. I’ve not been able to train because it increases the pain I’m in, and hiking in the mountains is going to be really tough – but I’ve never given up yet, so I’ll definitely finish it.

“I just want to raise as much money and awareness as I can for SSAFA.”

“The fundraising can’t ever stop because SSAFA’s work is so important.”

“SSAFA does so many things you don’t hear about. I know on a local level, through our tri-Station committee, that we’ve sponsored youth projects and sports teams. There are Stepping Stones homes for people who are leaving violent relationships or are at risk. SSAFA offers respite breaks for families with disabled children, adoption services, bereavement support, as well as casework.

“The fundraising can’t ever stop because SSAFA’s work is so important. It’s not just what you would expect from a military charity.”

“I’ve always worked in a tri-Service environment, so the fact that SSAFA supports all of our Forces really matters to me personally, and they offer a lifelong commitment to our veterans and their families. They are unique.”

“I feel supported, knowing SSAFA is there if I ever needed help too.”

“I’m a Mental Health First Aider and Suicide Intervention volunteer, both of which I got involved in as a result of my mother taking her own life. She suffered from Fibromyalgia, Rheumatoid Arthritis and mental health issues and she just couldn’t cope anymore. Through this work, I often refer people to Forcesline and signpost them to SSAFA services for financial assistance and pastoral or welfare support. Together we can do a lot for at-risk people.”

“I also feel supported, knowing SSAFA is there if I ever needed help too.”

“I had Thyroid cancer, and I understand the financial and emotional burden that can bring for some people. I was extremely lucky that the Unit I worked at looked after me really well, and I didn’t need SSAFA support myself, but it’s reassuring to know they would have been there if I did need them.”

“I’m so grateful for the support SSAFA offers our Forces, veterans and their families – I’ve seen it in practice many times and I’m so pleased I can do my bit to keep it working.”