Gib or Bust for the Veterans’ Banger Rally 2022

One of the most used phrases of the past two years has been “… because of Covid…”, and it is going to be used again about the Veterans’ Banger Rally, a madcap idea to gather an assortment of bargain-basement bangers worth £500 or less, and drive them – more in hope than certainty – from Dover to Gibraltar with monies raised going to SSAFA, the Armed Forces charity. 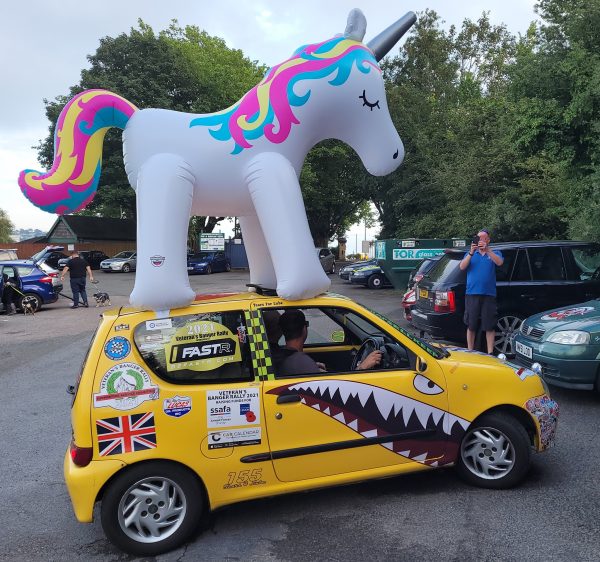 It was planned for 2021, but – wait for it – because of Covid and ensuing lockdowns and travel restrictions, it had to be postponed with the rally instead taking place in the UK. However, it is all systems go for September this year with a departure date from Dover of the 13th.

Appropriately enough for an event that will be both fun and a trial of endurance for vehicles and occupants, one of the stops en route is Le Mans, the home of endurance motor racing.

What the Passionnés français de courses automobiles (or French motor-racing aficionados), more used to the best that Dallara, Ligier, Aston-Martin, and Porsche can produce, will make of the motley assortment of veterans’ bangers is anybody’s guess. The thoughts of les bons citoyens of picturesque Pau – the last French leg of the journey before crossing the border into Spain – are equally open to question…

“Sponsored by KNO Solutions and Sterling Insurance, this five-day rally is open to veterans and their families and friends and each team will be raising funds for SSAFA as well as their own nominated charities as they put their vehicles, and possibly their sanity, to the test.

“The older and more knackered the car, the better. Cover the rust and cracks with stickers and gaffer tape or black nasty, customise to your heart’s desire, obtain sponsorship for your chosen charity (military or non-military), and away we go along some of the most beautiful roads that France and Spain have to offer.”

John added that a party atmosphere is

“…almost guaranteed with around 100 teams – including three teams made up of Chelsea Pensioners – driving the route from Dover to Gibraltar in stupid-looking cars”. He notes that teams can then scrap the cars there and fly home, or drive them back in “Top-Gear style”.

The entry fee is £300 per team, which can consist of two-to-four people. The vehicle must be fully insured for all drivers, and must have valid tax and a current MOT. John also advises that teams take out breakdown recovery for their vehicle.

Included in the entry fee are a single ferry crossing from Dover to Calais, a decal pack and plaque for each vehicle, event (NOT car) insurance, a donation to SSAFA, as well as medals for all participants and certificates for all teams.

It’s going to be a lot of fun for a great cause, and so all of us at the Veterans’ Banger Rally 2022 hope you’ll sign up and get ready to hit the road to Gib in September.”

Visit veteransbangerrally.co.uk for full details, route, rules and regulations, and how to sign up.