You are here: Home / News / News / Giving John his freedom back

Giving John his freedom back 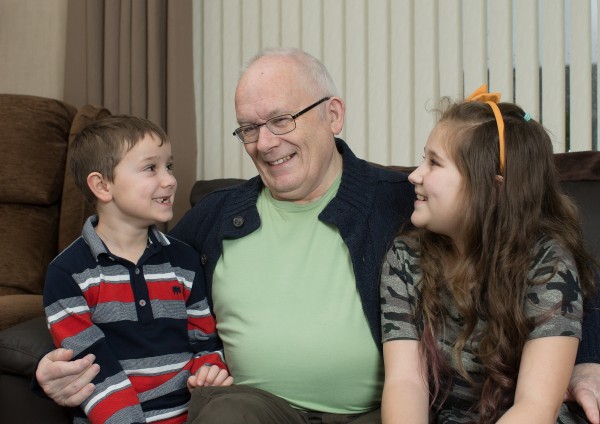 RAFA John at his home in Stanley County Durham with his Grandchildren. 23rd February 2017

When living independently was starting to be too much for John, he got in touch with the Royal Air Forces Association, to see if there was any support available.

John served in the Royal Air Force from 1970 to 1977. He was an aerospace systems operator and served throughout the UK as well as in Malta, Cyprus and Belgium. After deciding to leave the RAF he moved abroad, instructing and training in Saudi Arabia, before meeting his wife and returning to the UK.

He went into teaching and worked for 20 years as a special educational needs teacher. In 2006 everything changed, when a group of students assaulted him leaving him with a back injury and constant pain. John’s injuries and pain were so severe that he had to give up the teaching career that he loved.

John developed post-traumatic stress disorder following the assault and finds himself tensing at loud noises and he experiences hot flushes and flashbacks. He has not taught since being assaulted. He has tried other jobs, but none were a success. For the private and independent John, this caused him to spiral into 15 years of debt. He didn’t leave his home for 10 years, afraid to leave and face up to his problems. As John had used his compensation money to pay off some of his mortgage, his house was safe but he eventually became unable to pay his bills and debt collectors were chasing him.

John knew that support is available for those who have served in the armed forces, as he volunteers as a welfare officer. He contacted the Association, to see if we could provide any help.

His Association volunteer welfare officer organised a home visit and arranged for John to receive an electrically powered vehicle, more commonly known as a mobility scooter and a new, easier to use riser-recliner chair, that supports John’s injured back. John was unable to walk unaided and had tried to use a manual wheelchair, but his hands were too weak to propel him and his wife was not strong enough to push him. The scooter means that he can now go out and lead an active life. The difference to his life can be summed up in one word: freedom.

John can barely walk and is sometimes in so much pain that he is unable to even make a cup of tea. Getting a scooter has changed his life. Before, he would go out with his wife and have to sit in the car because he was unable to walk very far. A completely new life has opened up for him; he is able to go shopping and has his freedom of movement back. He says that he is overjoyed with the experience, as he can finally spend quality time with his wife and grandchildren, making new memories away from the house. His dog is also enjoying the benefits, as he is getting regular walks.

John says that everyone who has been in touch with him is wonderful and friendly. He says: “It is incredible that I have been so looked after, as I left the service so many years ago.” Help is available for so many different things, John almost gave up his volunteering role as walking was such a struggle. Now he is enjoying life again and is looking forward to moving to a house that is fully adapted to his needs.