Tuesday 25 April – Two years on from the devastating Nepal earthquakes, a British charity is rushing to rehouse hundreds of Gurkha veterans and widows before the third monsoon since the disaster arrives.

The quakes left approximately 600,000 people across the country without a home. The majority are still living in rudimentary shelters constructed from corrugated metal sheets and the remains of former buildings.

The Gurkha Welfare Trust (GWT), which supports ex-Gurkhas and their communities, has already built homes for 850 of the more than 1,100 veterans and widows who were affected. However, around 250 are still waiting for proper accommodation as torrential rains approach for the summer months. Most live in isolated communities in the Himalayan foothills.

Brothers Kul Bahadur (74) and Gunga Bahadur Gurung (77) both served in the 6th Gurkha Rifles throughout the 1960s, including tours of Malaya, Borneo and Brunei. On leaving the Army, they returned to their native village of Lankachhar in Kaski district, remaining there until the earthquakes destroyed their homes in 2015.

Both men are currently living with their extended family in cramped rooms borrowed from neighbouring houses that survived the quakes. They are each waiting for the completion of new homes built by GWT.

Kul Bahadur said: “When the earthquake came, we were eating lunch. We ran outside and moments later the house crumbled. It was terrifying – moments later and we would be buried under rubble.

“Life is very hard now. There are five of us in one room, including my granddaughter who is only a baby. There’s no privacy; it’s hard to even sleep. The worst is when it rains because we can’t even go outside and the roof leaks. I’m looking forward to moving in to the new house.”

Gurkha hero Rambahdur Limbu VC, the last surviving Nepali recipient of the Victoria Cross, has spoken out in support: “To survive the wars and come home, only to lose everything to an earthquake, is a cruel fate. I feel for my fellow veterans at this time.

“It is encouraging to know that The Gurkha Welfare Trust is helping them. I hope that the British public continue to show their generous support in our time of need, as they have done for many years.”

GWT Director, Al Howard, said: “It’s been a phenomenal challenge to get this far. We’ve had to contend with political disputes, widespread shortages of materials and the complication of Nepal’s challenging terrain.

“Recently, negative fluctuations in the exchange rate have also pressured our efforts but we are 100% committed to getting a roof over the heads of our old soldiers and their families.”

More broadly, the charity has undertaken a comprehensive community aid plan that will build or repairs hundreds of schools and water systems up to 2020.

To find out more about their work, visit www.gwt.org.uk/no-man-left-behind. 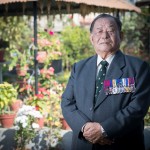 Images and video are available to download via Dropbox at:

About The Gurkha Welfare Trust:

The Gurkha Welfare Trust is the leading Gurkha charity, established in 1969. It provides financial, medical and development aid to Gurkha veterans, their families and communities. The Trust is a registered charity (No 1103669). For more information on its work, please visit www.gwt.org.uk.