The amount of time that Simon O’Brien spends in the saddle raising funds for SSAFA, the Armed Forces charity he could be called an unofficial “spokesman”. 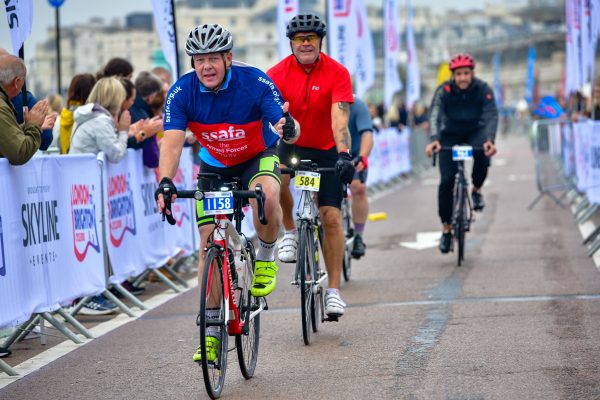 Puns aside, Simon – or OB as he is known – raised a shade over £5,400 for SSAFA in 2021 alone through a whole range of bespoke and organised fundraisers, including with his employer, which is one of SSAFA’s vital corporate partners and provides support through the Boeing Emergency Fund and to SSAFA’s Mentoring Service. OB is continuing his epic fundraising for SSAFA this year.

Living in Hook, the 58-year-old veteran – he spent 34 years in the RAF as aircrew on Chinook, Puma, and other military helicopters as an Air Loadmaster and leaving as a Squadron Leader – has worked for the aviation giant for nearly five years.

OB began his career as Air Safety Official for Boeing Test & Evaluation at Boscombe Down, later becoming Lead Analyst at Boeing’s Strategic Experimentation & Analysis capability known as The Portal, and is now its Senior Manager at its base in Fleet.

Explaining his reasons for fundraising for SSAFA, including the support Boeing has given, OB said:

“With many years of military service behind me, I’ve seen the outstanding support that SSAFA provides to my tri-Service colleagues, I felt it was time to give something back and to do my bit. I’ve received support from SSAFA myself and know only too well how much I valued their help.

“Boeing recognises the huge support network that SSAFA provides to our serving, reserve, or veteran community and have been with me every step of the way. They have been pivotal in enabling me to fulfil my role as a SSAFA fundraiser and successful transition from military to civilian employment.”

OB recently met SSAFA’s Corporate Partnerships Manager, Sam Nowell, at the end of the charity’s 13 Bridges event in London. It was a chance for OB to present Sam with a large – in more than one sense – cheque.

“The kind of dedication to SSAFA, and its beneficiaries, that OB demonstrates is quite humbling, and it’s because of his tireless support – and that of so many other individuals and groups, and corporate partners like Boeing – that we can continue to provide the support that veterans, serving personnel, and their families need and provide it how, when, and where they need it just as SSAFA has done for 137 years.”

SSAFA’s life-changing work for the Armed Forces community – regular and reserves, serving or veteran, and their families – is only possible because of donations and corporate partnerships. For more information about becoming a SSAFA Corporate Partner, visit ssafa.org.uk/corporate.