You are here: Home / News / News / Help for Heroes launches ‘The Firework Heroes Code’ for this Bonfire Night

Military charity, Help for Heroes, is launching ‘The Firework Heroes Code’ this week, asking for the British public to let their neighbours know when they are having a firework display in their garden on or around Bonfire Night on Friday 5 November. The charity wants people to be more mindful of the negative impact that fireworks can have on wounded veterans. 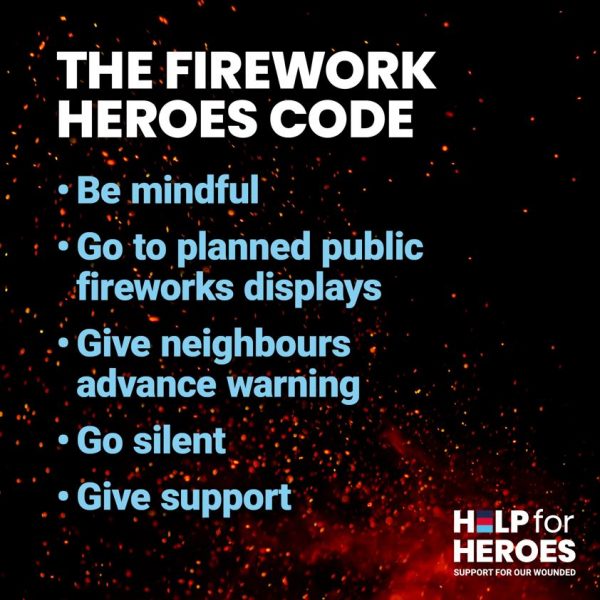 “The vast majority of the veterans that we support for mental health issues tell us that they don’t like fireworks. It can be the bangs and the flashes, but also the smell of fireworks can be a massive trigger for them. These stimuli can remind veterans of bad moments they experienced in combat and make them relive traumatic events in their lives. It can be particularly problematic for those with PTSD.”

This is why the charity is calling for the British public to be heroes and use ‘The Firework Heroes Code’ this year:

Former Senior Aircraftsman in the RAF, Matt Neve, 36, from Brechin, explains why ‘The Firework Heroes Code’ is so important,

“I despise this time of year.  The planned public events aren’t so bad and the new silent fireworks are a good idea. It’s the unexpected bangs of fireworks in people’s homes or in the street that take me right back to where my trauma began and triggers my PTSD. Hearing them makes me fearful and angry but I also have a physical reaction as I shake and my heart races.

“I have to take myself out of the situation and sit somewhere quietly, take deep breaths and compose myself to bring myself back to the ‘now’ rather than the trauma I’ve been taken back to.”

Steve Mills, 56, who lives in Altrincham and served in the Household Cavalry Regiment and the Royal Signals Territorial Army, was diagnosed with PTSD in 2009. He adds,

“For me it’s both the sound of them and the smell; they spark flashbacks and panic attacks. I can feel like I’m having a heart attack, I become hot and clammy, get headaches and I feel nauseous.

“I’m mentally drained by the time Bonfire Night comes around because people are letting fireworks off weeks before and they carry on for weeks after, right up until New Years Eve when it starts all over again.”

Both veterans talk about how their coping instinct makes them try to hide away from fireworks, perhaps putting headphones on and listening to music or turning up the TV. However, the best way to help veterans cope with fireworks long term is to give them supported exposure and desensitisation treatment.

They are taken through graded levels of exposure to fireworks with relaxation techniques, support and education at all times. For example, they may start by looking at photos of a firework display. Once they are comfortable with this they may watch YouTube videos of fireworks displays with the sound down, then with the sound on. The final stages could be for them to attend a firework display with noise cancelling headphones, and then to take the headphones off or set off their own firework.

“Bonfire Night is a big event in the calendar for a lot of people, and we don’t want to take away the fun. We’re just asking people to be mindful that not everyone enjoys them, and that goes for pets too. ‘The Firework Heroes Code’ is a really simple way to ensure that you minimise the impact of your own event on others – so we can all feel good at this time of year.

“We would also ask any veteran who is feeling troubled by fireworks to contact the Hidden Wounds team at Help for Heroes for support.  Just go to https://www.helpforheroes.org.uk/get-support/.”