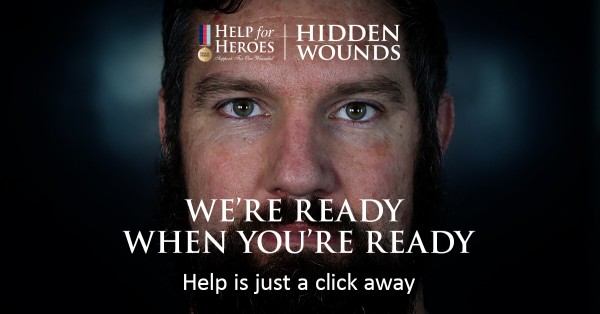 Former Corporal, Daniel Grobler (who lives in Newbury, Berkshire), is encouraging other Ex-Service Personnel to get support if they feel they’re suffering from mental health issues, as we draw closer to ‘Blue Monday’.

Blue Monday (Monday 16th January 2017) is a name given to a day in January reported to be the most depressing day of the year, and for many former military personnel this will be a tough time of the New Year.

Help for Heroes Hidden Wounds is a psychological wellbeing service offering support to Veterans, their families and the families of those currently serving who are struggling with anxiety, depression, anger and those wishing to change their drinking habits. Free, confidential and expert support is available by phone, Skype or face to face.

To bring awareness to their Hidden Wounds service, Help for Heroes have released a short film in which Daniel features, in a plight to highlight some of the common factors to be aware of if you might be experiencing mental health issues – and indeed the access to support.

Daniel served with the Army Air Corp and served tours in Germany, Brunei, Iraq and Afghanistan throughout his military career.

Daniel always wanted to join the military and said it was “in his blood” from a very young age.

It was whilst serving in Brunei that Daniel was involved in a road traffic accident returning from work on his motorbike when a vehicle pulled out from behind a lorry to overtake – colliding with the motorbike and dragging Daniel 50 meters down the road.

He was flown to Headley Court from Brunei to begin his rehabilitation and after a very challenging period where he had to overcome the physical injuries following the accident, he also started to struggle with his mental health.

It was here that he was encouraged to try sport as part of his recovery, having been very active prior to the accident.

“The sports I do have helped me at opposite ends of the spectrum; archery helps me focus and takes away anything going on in my head. Wheelchair rugby provides me with a way of venting anger and working out my frustrations.” Daniel secured a place on the UK team at the inaugural Invictus Games in London in 2014 and again in 2016.

He does still miss military life, the comradery. He has a new job which is a positive step, but it is challenging and difficult for Daniel to adapt to life as a civilian. “The Army was amazing, but you only realise after how much you miss it. Getting involved with Help for Heroes has helped me get back into sport and this has helped me no end with the physical and psychological problems that I face.”

“My family have been affected; when I came back from Afghanistan it put a lot of strain on them. My injuries have changed me, I’m short tempered and there’s a different side to me now. Sport has helped me to build relationships back up; it’s a way for me to not take my frustrations out on my family.”

Daniel says Help for Heroes has become a massive part of his life.

The charity has supported him with a grant for archery equipment, enabling him to train and also to teach his daughter Megan – who now enjoys archery with her dad. His wife is a Band of Sister and has enjoyed a respite weekend at Tedworth House, where she spoke with others in a similar position and made friends, and importantly it was a chance for her to relax. She is taking part in the Burma Trek fundraising for the charity later this year.

“Getting the support has brought my stress levels down, going away for training and meeting others in a similar position has helped socially, psychologically.  Whilst not everyone is in the same position we can understand and share our experiences.”

For anyone that is perhaps wondering whether to take that next step and ask for help, Daniel says: “Don’t sit at home, you’re not alone. As a group the military are very good at bottling things away but this culture needs to change. For many years I was proud, not wanting to show fear or that I was broken or hurting, but I encourage people to take that next step.”

“It’s not a sign of weakness to get help. Help for Heroes have really helped me and my family along the way.”

He suggests looking out for things that he recognised before taking that step and asking for help. “Anxiety was a big thing for me, I was always such a confident person but anxiety changed my life and I tried to fight it for too long. Depression is another, I noticed that things that used to bring me joy didn’t anymore, and I was left in a dark place. These might be things you recognise in yourself and if so, I’d really urge you to reach out for help.”