On 3 June, volunteer London Cab drivers will take 25 WWII veterans to Normandy for the D Day commemorations, amongst them will be D Day veteran Peter Smoothy. 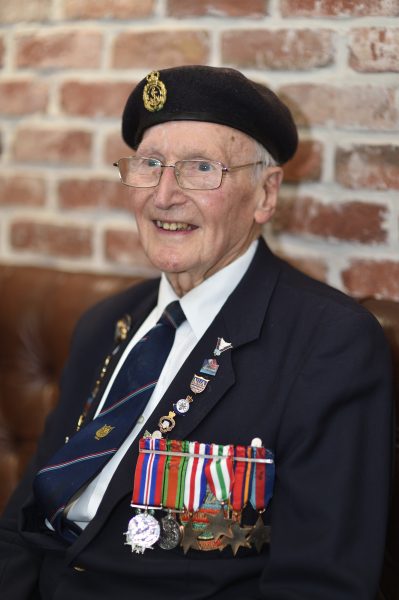 On 6 June 1944  Peter Smoothy was one of the 156,000 allied   servicemen that took part in the Invasion of Normandy  as part of Operation Overlord. On 3 June Peter will be joining 24 other Normandy Veterans on a free six-day trip to Normandy  with the Taxi Charity for Military Veterans  for the D Day Commemorations.

On D Day Peter was one a crew of  99 on a Landing Ship Tank LST 215 which headed across the Channel to Juno beach. His Landing Ship carried 28 tanks on the inner deck, 40-45 lorries on the upper deck, and 200 soldiers who were drivers and crew for the vehicles.

“We were scheduled to unload our valuable cargo of vehicles and men on Juno beach at 7.30am but the beach had not been cleared so we waited for an hour, two miles offshore for the beach to be cleared so that we could find space to unload. There were shells flying all around us and we were lucky not to be hit but of course we were just one of 1000’s of boats. We were all very young men and said at the time, If our names are on a bullet its our bad luck – we were lucky that our names weren’t.

“When we finally got to the beach it took us 3-4 hours to unload with shells whizzing over our heads and when we were ready to leave, the tide had ebbed, and we couldn’t get off. Fortunately for us, an empty ship isn’t really a target for the enemy, so we spent the day on the beach without being hit and only heard two air raid warnings.

“During that wait by the shore, two hundred German prisoners of war were brought to our ship. Afer searching them we put them on the inner deck where they sat quietly smoking, and not causing us any problems, probably very relieved that for them the war was over, and they were safe.

“We finally got off the beach at 7pm that evening, returned to Southampton, dropped the POW’s reloaded and headed straight back to Juno the next day.”

“I have been volunteering for the Taxi Charity for seven years and have got to know Peter very well. I will be picking him up from his home in Herne Bay on Friday 3 June and we will join the other volunteer Cab Drivers at Portsmouth for our ferry over to Normandy. I think the most moving moments of the trip for both Peter and I will be the visit to the Juno Beach Centre on 5 June and the D Day Ceremony at Ranville CWGC  on the 78th Anniversary of  D Day. It is an absolute privilege to drive these brave men and women and the volunteer cab drivers feel honoured to call these WWII veterans friends.”