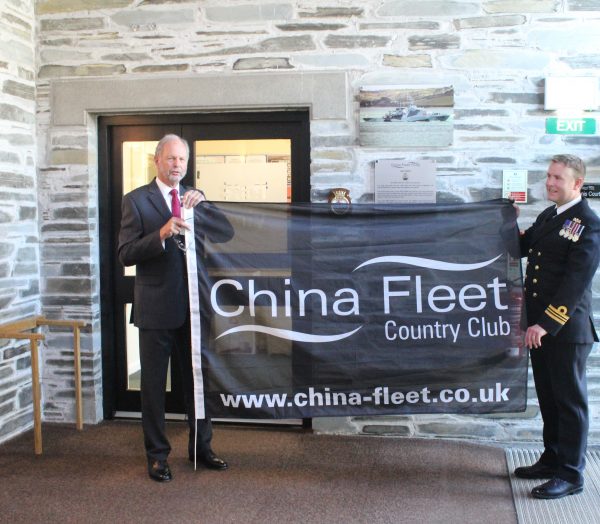 At an official ceremony, the China Fleet Trust Chairman, Rear Admiral Mike Wood CBE DL said how delighted and immensely proud he was of the close links and continued support with the Royal Navy.

“I will ensure that we will do all we can to support the Royal Navy’s newest and greenest warship wherever her future operational programme takes her, and that her crew and their families all feel that the Club is theirs in which to relax, enjoy and feel at home.”

Set in 180 acres, set on the cusp of the Devon and Cornwall border, China Fleet is one of the South West’s leading country clubs. 15 minutes from Plymouth its stunning Tamar estuary location has been its home since 1991, when the Club re-located from the Far East.

Its historical links with HMS Tamar go all the way back to Hong Kong.  HMS Tamar was the name of the Royal Navy’s base in the Crown Colony from 1897 to 1997, and many of the sailors and royal marines who served there would have enjoyed rest and recreation in the China Fleet Club.

Lieutenant Commander Michael Hutchinson, the Commanding Officer of HMS TAMAR was there to open the Club’s new Heritage area and acknowledging the affiliation with his ship. TAMAR has been on operational duty off Carbis Bay for the G7 summit.

Now with the China Fleet Country Club being based on the River Tamar, those links of history and geography have combined to enable a new relationship, which demonstrates the value the Royal Navy places on the support the Club provides to its beneficiary community.

“I believe that the Club can contribute significantly to Cornwall’s enduring relationship with the ship and its people,” added Rear Admiral Mike Wood who presented Lieutenant Commander Michael Hutchinson with the brand-new Cornish flag gifted by the Mayor of Truro to the ship.

All serving Royal Navy, Royal Marines (including Reservists), RFA personnel and their immediate families are automatically members of the China Fleet Country Club. Registration is free and members can receive your discounts and offers.