Resident veterans living at Launchpad’s Hollyacre House in Durham are set to benefit from major investment and improvements that will increase the quality of living at the house. 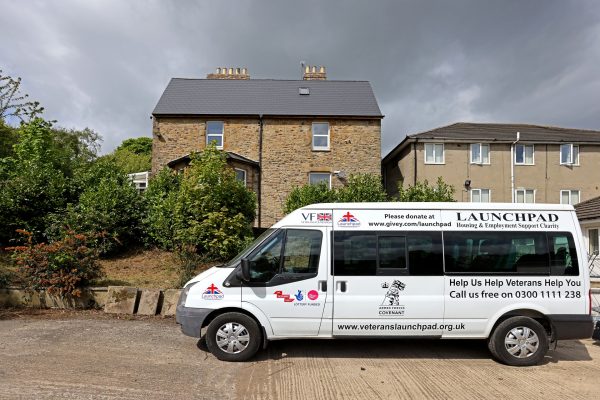 Plans are being drawn up to look at how a shared flat can be converted into four individual self-contained flats, while landscaping to the rear of the building, the inclusion of a sensory garden, improvements to security and a lead support worker for the house are just some of the plans in the pipeline.

The charity, which provides vital accommodation and support for up to 100 veterans in three houses in the North of England, received a boost last week when The Mercers’ Company’s Church & Communities Committee agreed to award Launchpad £72,313 over two years from the Charity of Sir Richard Whittington, towards the costs of a lead support worker and upgrades to the security and CCTV at Hollyacre House.

Hollyacre House, based in Sacriston, County Durham is the charity’s third house and once all the works have been completed, will include 18 self-contained one-bedroom flats and communal facilities such as a lounge, kitchen and IT suite. The charity purchased Hollyacre Centre on Front Street, Sacriston from administrators, after Single Homeless: Action Initiative in Durham (SHAID) was placed into administration earlier this year, securing the future of eight veterans and saving four jobs.

Just two months since exchanging contracts with administrators, Launchpad is already making significant improvements around the house and this latest grant from the Charity of Sir Richard Whittington (of which The Mercers’ Company is sole Trustee) is a huge boost to the charity.

The Mercers’ Company is a livery company focused on being a philanthropic force for good. They have a rich history dating back to over 700 years with philanthropy as the common thread between their past, present and future.

Each year, they distribute up to £15 million to charitable causes focussed on young people and education, older people and housing and church and communities.

The role of a lead support worker is important as they work closely with the residents and will carry out in-depth assessments and help them develop a personal action plan to address their individual needs.

These are likely to include overcoming mental health problems, building employment skills / work experience, and developing independent living skills. They will also liaise with residents, staff, volunteers and partner organisations by encouraging those who need support to engage with the extensive range of agencies that provide expert relevant help.

“The support we’ve received from partner organisations for our residents has been fantastic. Since we took on Hollyacre House in May, we’ve been spending time identifying what improvements need to be made around the house.

“This very generous grant from the Charity of Sir Richard Whittington is a huge boost and will enable us to fund a lead support worker who will work with the residents to help them on their journey to moving on independently and transforming back to civilian life. The installation of CCTV will also help our staff and residents feel safe and secure. We are very grateful for their support.

“We have made good progress talking to organisations about restructuring the large flat and the external garden area, making it more accessible for residents which will also help them with their mental health and wellbeing.”