You are here: Home / News / News / “An honour to work alongside the RAF Regiment”

“An honour to work alongside the RAF Regiment” 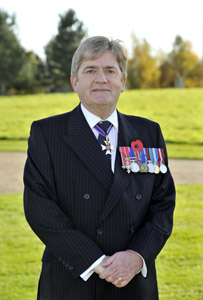 As the RAF Benevolent Fund commemorates the 75th anniversary of the RAF Regiment, RAFBF Controller Air Vice-Marshal David Murray pays tribute to those who have served, and still serve.

I served in the Royal Air Force for some 34 years and during that time I had the honour of working alongside the RAF Regiment at home and abroad, both in a training role and on operations.

The RAF Regiment instructors are responsible for training all Royal Air Force personnel in basic force protection such as first aid, weapon handling and CBRN skills. On my last station tour, as Station Commander at RAF Halton, where we were responsible for the initial training of all junior ranks, I often thought the station was “Depot South”, with the largest number of RAF Regiment Officers and NCOs (including 12 Warrant Officers) concentrated in one place anywhere, except for the Regiment Depot itself.

I had the pleasure of working with the Regiment on operations in Northern Ireland, Bosnia, the Falklands and Sierra Leone. I always knew what I was going to get with the Regiment – honesty, reliability, dependability and adaptability are words that spring to mind. If I asked a Rock Ape to do something, very rarely did I have to ask a second time.

Over the years I have met a number of Rock Apes who have struggled and found it hard to accept help when they have fallen on hard times. They were all tough, proud men, who often through no fault of their own, ended up in a bad place. As the main ground force for the RAF, casualties are often from the RAF Regiment and the RAF Benevolent Fund has played a key role in supporting these men and their families.

We are incredibly proud of them all as they have not let life-changing injuries stand in the way of remarkable  achievements.  Just this week, we saw Luke Wigman, a former Gunner who was blown up in Afghanistan and told he would never walk again, run seven marathons, in seven days across seven continents. No matter how tough you are, and I recognise that many in the Regiment pride themselves on being self sufficient and robust; we all need a bit of help sometimes.  The RAF Benevolent Fund exists to help and support those in the RAF family, both serving and veterans in their time of need.