You are here: Home / News / News / Hove man walking from Lands End to John O’Groats to raise money for military charity that supports his father

A man from Sussex is walking the entire length of the country to raise funds for Blind Veterans UK, the national charity for vision-impaired ex-Service men and women that has supported his father. 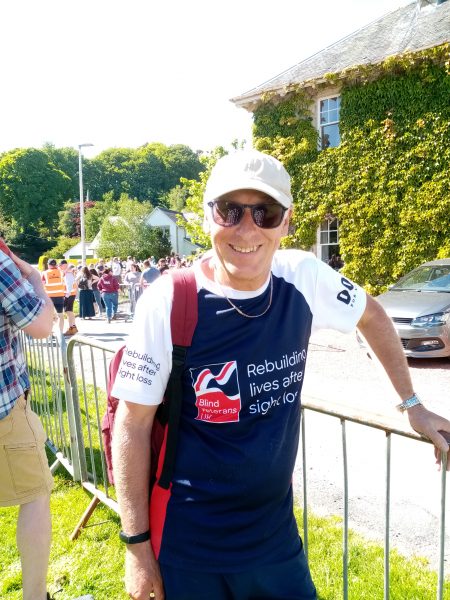 Gary Taylor, who is 59 and from Hove, is walking an average of 18 miles a day for 83 days across the United Kingdom from Lands End to John O’Groats.

He left Lands End at the beginning of April and is due to reach his final destination on 29 June.

“I’ve had a long-time ambition to walk the entire length of the country and I’ve now found myself with the time to be able to do it. It’s a great way to see and fully enjoy the amazing landscapes we have right here in this country.

“I’ve particularly enjoyed walking the coastal paths and my time walking through the Cotswolds. Some of the best days have been those when other people have come along and walked with me. My daughter joined me for three days near Worchester which was really lovely.

“However, I’m a city boy at heart and I can’t say I’ve enjoyed having to cross fields full of cows!

“The walk is something I have always wanted to do for myself but to be able to raise money for Blind Veterans UK, who have been there to support my father, makes it even more special.

“I’ve met many people along the route and I’ve told them all about why I am doing the walk and about Blind Veterans UK.

“When I stayed in the Railway Inn in Ripple the landlord said he would run a quiz night for the charity and later contacted me to say he had raised £241.”

Gary’s father, George Taylor, is 89 and has macular degeneration in both eyes.

George, who served in the Royal Airforce as an Airframe Engineer, started receiving support from Blind Veterans UK in 2019 and, prior to the Covid-19 pandemic, would visit the charity’s Centre of Wellbeing in Brighton on a weekly basis.

“The charity has been really good to my father and he’s been provided with a range of equipment to help him with day-to-day activities such as magnifiers and a reader for newspapers and documents.

“I am pleased to be able to do something to give back to this fantastic charity so they can continue to support more blind veterans like my dad.”

Blind Veterans UK supports thousands of blind veterans across the country, but knows there are tens of thousands more who still need its support to rebuild their lives after sight loss.