You are here: Home / News / News / Interesting facts about our work – an overview of the work of the Ministry of Defence and Veterans UK 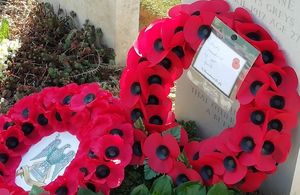 The MOD’s Joint Casualty and Compassionate Centre (JCCC) Commemorations Team, also known as the MOD’s ‘War Detectives’, is responsible for attempting to identify British personnel killed in historic campaigns dating back to the Great War and arrange a military ceremony.

Due to the nature of our work, one of the first questions we’re often asked is “Do you have any jobs?”. As we are a small team based in Gloucester, opportunities to work with us are rare but any vacancies will be advertised – like all civil service posts – on Civil Service Jobs. Sadly, we’re not able to offer any volunteering opportunities.

We receive a variety of enquiries regarding all aspects of our work and so we have collated the most common, interesting facts.

How we research our recovery cases and how it can lead to an identification; when DNA is used and how we find family members.

There are some differences between World War One (WW1) and World War Two (WW2) casualties.

When the remains of British military personnel are found on historic battlefields, one of the first thing we look for is any clues as to who they served with, for example shoulder titles or cap badges.

Without this information we have little chance of making an identification (unless the casualty is found with personal items that include their name or service number). Once we know a casualty’s regiment, we can try to work out when they were in the recovery area. The other types of clues that are invaluable is if we find some rank insignia, for example sergeant’s stripes.

Reference sources we use

The first step we take is to look at the battalion war diaries to find out exactly where a regimental battalion was on any given date. The whole of the Western Front was mapped into squares of 500 yards so troops’ movements can be plotted, and a recovery location pinpointed accurately; these are known as trench maps (available via various websites online). The Commonwealth War Graves Commission (CWGC) holds records of exhumations from each of the trench map “squares”, which can be helpful in showing which regiment’s casualties have previously been found in the same location. We also look at regimental histories, personal diaries, information held by regimental museums and online. Each of the Services has a specialist historical branch who can assist us when required. Some of the other sources of useful information we look at are Soldiers’ Effects Registers, pension cards, Red Cross Prisoner Of War (POW) records, medal index card and newspaper archives.

When we’ve done our regimental research, we should have some idea when a particular regiment was in the recovery location. We will also have another look at the artefacts to see if there’s anything that might help us with a date of death. For example, there may be parts of a small box respirator found with a casualty. These weren’t first issued until 1916, so we can rule out a date of death before then. We will look at CWGC exhumation records to see if any other recoveries from the same regiment were made, and when. All the information should help us to narrow down a date of death to within a few days.

The next stage in our process

Once we have a regiment, a timeframe for the death and hopefully a rank, we will search the CWGC database to find out how many casualties of a particular rank/battalion/regiment died during the day(s) in question and have no known grave.

How we use DNA for identification

If we can narrow a list of potential casualties to around 10, we will consider taking DNA to help us. DNA is only ever used as a confirmation of what we suspect. Instead, our process uses all the available evidence from the site of the recovery and military records to establish the potential identity of a casualty before using anthropology and finally DNA to add an additional level of confirmation. DNA matching to the standard needed to make a positive identification is rarely sufficient in its own right. Given the passage of time, the condition of many of the remains found, and the changes in family dynamics, it is often the case that even those with a very strong likelihood of a direct family relationship will only have a partial DNA match. Hence to start the identification process by trying to work from DNA matching would be unlikely to succeed and is more likely to result in raising expectations that could prove upsetting to the families involved.

We contract our DNA work out to a reputable firm of forensics experts. They will take samples from the casualty’s remains, prepare male and/or female profiles, before comparing them against a sample taken from a suitable relative. They also undertake anthropology work for us, giving us an approximate age range and height, which can be used to further narrow down a pool of potential candidates. Our DNA contract is re-let periodically through an open commercial competition.

Not every member of a casualty’s family is a suitable donor for DNA. In short, we need to follow either a direct male (Y STR) or female (MtDNA) line through the generations. For example, a casualty’s son/grandson/great grandson etc would all be suitable donors; as would a sister/niece/great niece etc. But if the casualty had a daughter, her father’s DNA would stop with her and any of her subsequent children/grandchildren etc wouldn’t be suitable for comparison.

We never collect DNA from living relatives in anticipation of future finds due to the ethical and legal implications enshrined in UK law.

In practical terms, processing DNA samples to the level required for positive identification of casualties is a complicated process, and far exceeds the more generic service offered by family history companies.

How we trace a casualty’s family

We take what information we have (date and place of birth, parents and/or siblings names) and build a family tree. We will look at census information (the last one available is the 1939 Register) and try and work down to a current generation. We are only able to use information already in the public domain, for example, electoral rolls, but this usually gives us enough to have some idea of who a current relation might be. We’re sometimes able to locate them via social media or we put out an appeal on local TV, radio or newspapers, as well as via our own Facebook account: @wardetectives.

The vast majority of those recorded as having no known grave are likely to be amongst those buried ‘Known Unto God’ in CWGC cemeteries or, sadly, were lost in circumstances where no remains will survive. Some are still buried where they fell in shallow field graves and it is this category that make up the majority of our work, as human remains are always being found, especially in France and Flanders. The cases we deal with make up only a tiny proportion of the total of those without a named final resting place. There are over half a million still missing from the Great War. About a third of those are thought to be buried as “unknown” while the other two thirds are still “missing”.

The majority of our work for WW2 casualties is made up of RAF personnel where aircraft crash sites are excavated, particularly in the Netherlands and Germany. Our research in these cases uses RAF Combat Reports, Operations Record Books, Aircrew Logs and Casualty Files. If the identity of the aircraft can be established, it’s usually much easier to name its casualties, since there would be a maximum number of potential candidates (depending on the type of aircraft) and the names of the crew on lost aircraft are kept on RAF Casualty Files. The information about DNA and searching for families (shown above) still applies. As far as Royal Navy casualties go, sadly their casualties’ remains are lost at sea rather than recovered.

There are still occasionally Army casualties found from WW2 conflicts. We would use the same research methods as for WW1 casualties.

It is sometimes possible to work out who is buried in an “unknown” grave in one of CWGC’s cemeteries and a number of researchers/historians/family members/members of the public do this and submit their evidence for consideration. This must be done by research only – the exhumation of a war grave for the purposes of identification is not permitted. As well as proving the link between a potential candidate and the unidentified casualty, it’s equally important to discount all other potential candidates from the investigation. All cases must be sent to CWGC in the first instance for them to check against their records; if they feel a case has merit, it will be forwarded to the Service historical branch and then on to us for a final decision. Guidance on how to submit an Identification case can be found on the CWGC’s website.

For clarity, the main aspects of our work can be summed up as:

Since the 1980s, the families of service personnel who died overseas have had the option of their loved ones’ bodies being repatriated to the UK for burial and/or cremation. Prior to that, all war dead were buried in the country of their death and no repatriation was permitted. Those rules are still in force for those who died in either or the World Wars. They are buried with their compatriots; “served together, died together, buried together”.