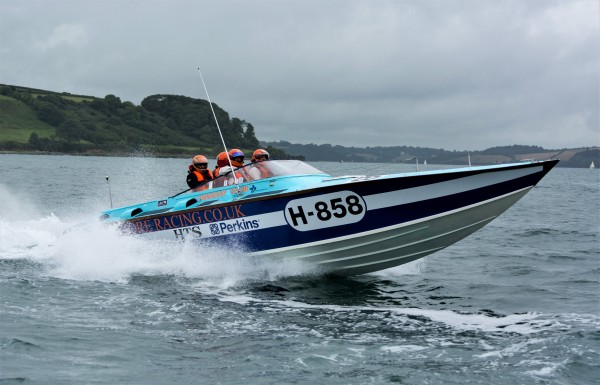 Making a splash: watch the powerboat action at Falmouth Harbour in June

An international powerboat race, which comes to Falmouth from June 29 to July 1, has announced a partnership with a sailing charity for injured veterans.

The new partnership will see the International Powerboat Race Club (IPRC) join together with Falmouth-based Turn to Starboard for the first time to raise funds for those affected by military operations.

After a day of testing and launching the powerboats at Port Pendennis Shipyard, drivers will make a splash on Saturday, 30 June as they race two laps of a course from Falmouth to Plymouth and back – a total of 144 miles. On Sunday, 1 July, the thrills and spills will continue with a series of open-entry fun races where visitors can watch the action from the headland and seafront.

Paul Mitchell, founder of the International Powerboat Race Club said: “Everyone at the International Powerboat Race Club is very excited to have Turn to Starboard as our official charity partner. The organisation do outstanding work raising funds and awareness in helping those affected by military operations via various sailing activities plus gaining qualifications.

“Hopefully we at IPRC can offer further assistance by introducing those affected to the world of powerboating and perhaps for those inclined the opportunity to enter powerboat racing offering introductions to training programmes for race officials and/or obtaining a racing license. We look forward to working hand in hand with the charity in the future.”

Turn to Starboard Corporate Relations Coordinator, Marie Harris, said: ““We are delighted to be entering into a partnership with the International Powerboat Race Club. We look forward to building on our relationship in order to promote our service of supporting veterans affected by operations and helping many find a brighter future.”

For more information about the event, or to sponsor a race or a race boat, contact Paul Mitchell at iprc.racers@gmail.com. To make a donation to Turn to Starboard, visit turntostarboard.co.uk.