Launchpad’s Speke House in Liverpool has undergone significant improvements to increase the efficiency and security to help residents feel warm and safe. 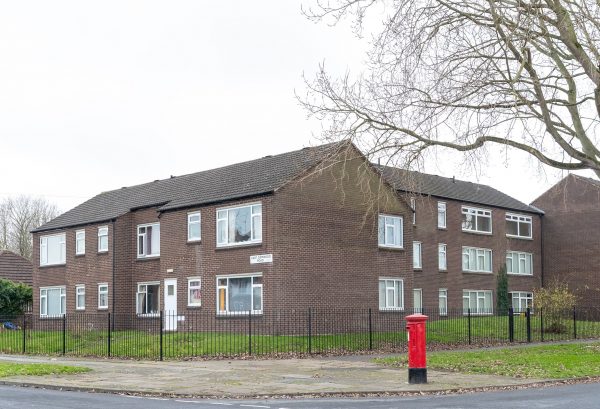 Residents living at the house, which includes 50 self-contained flats, said the improvements have made a huge difference to keeping their flats warm and comfortable since new double-glazed windows were installed in all communal corridors and rooms.

Residents said they were struggling to keep their flats warm because of the draught coming from the old, ill-fitted windows in the communal areas and were worried if this may impact on how they could afford to pay their bills with energy costs set to increase in the coming weeks.

Each self-contained flat is metered and residents pay for their own heating, typically costing around £20 per week but, with energy and fuel costs rising, this could almost double and staff at the charity were worried that some veterans may choose not to heat their flats to try and save money.

In total, 35 windows have been replaced in the communal corridors and the main external security door has also been replaced thanks to a one-off capital grant of £22,000 from the Clothworkers’ Foundation.

The Clothworkers’ Foundation awards capital grants to charities and not-for-profit organisations who work across one or more of their defined programme areas. The foundation has awarded in excess of £152 million since it was founded in 1977 and Launchpad applied for this funding through their homelessness programme.

“Speke House previously operated as an old people’s home and was in poor state of repair. When Launchpad purchased the house in 2014, our aim was to make sure all 50 flats were habitable and functional. We secured funding in 2019 to replace all windows inside the residents’ flats but, were unable to complete all the refurbishment needed, especially in the communal areas.

“These were capital works that needed to be undertaken around the house and thanks to this one-off grant from the Clothworkers’ Foundation, it has allowed us to replace the old windows which were draughty and residents were complaining they could feel the cold from the corridors.

“With prices for energy, fuel and shopping bills all rising, these works have come at a good time and will help to keep heat inside the corridors and flats, thus reducing costs for the veterans.”

There are other refurbishment works planned to ensure the house is kept in good condition. This includes replacing all storage heaters that heat the communal areas, replacing carpets in the communal areas and improving the car parking facilities at the house to accommodate disabled residents and visitors.