Andy McIntosh – Chairman of SSAFA Lanarkshire and late of the Cheshire Regiment – had good reason to enjoy the view across the Trossachs from the summit of Ben A’an, especially given that the average time to ascend its 1,512 feet (461 metres) is around two hours or so, and Andy did it in just over 100 minutes. 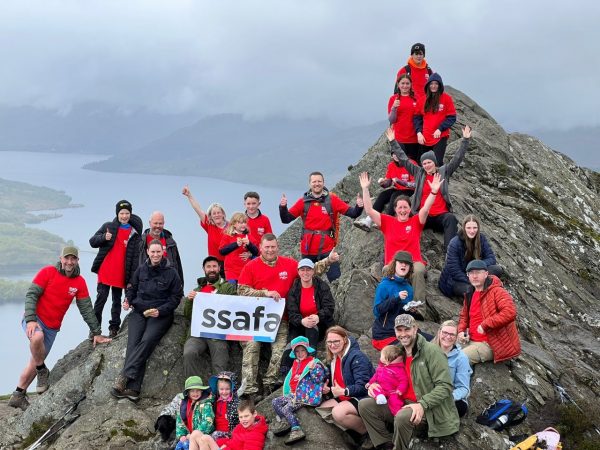 “Not bad”, might be the general reaction to this, but Strathaven resident Andy was told just a decade ago that injuries he sustained during his service meant he would never walk again.

The road to recovery for Andy has been long and arduous, with the fundraising ascent of Ben A’an for SSAFA another step on the way on an unfinished journey. He said:

“I think this has to be one of the single most challenging things I’ve ever done, and if someone had said to me 12 months ago I’d be able to do this, I’d have laughed and said they were mad.

“I set myself a target of four hours to summit and I managed to do it in 1hr 44 mins, smashing that target and so far raising £1,600.”

Originally from Manchester, Andy, who served in Bosnia and undertook several tours of Northern Ireland, said:

“I felt alive for the first time in years and that’s all down to Alan and Lucy Clark of FTPT Gym in Strathaven. They took a chance on me when I was told I couldn’t do any fitness or walk any long distances anymore due to my health issue.

“The support from everyone at the gym has been magnificent, but especially from Alan who knew when to push me and when to ease off. None of this would have been possible, however, without him my support team on the day of Alan, Craig French, and Jim Lockwood who got me up – and down – safely.

“But my last ‘thank you’ has to go out to everyone who has donated to this and made an old veteran a happy man.”

“In total, there was a team of 30 members and their children from Strathaven FTPT who supported Andy on the day and reached the summit. We were rained off from camping overnight, so Andy had to do the return journey the same afternoon but absolutely smashed his original target of four hours up: he was up AND down within four hours!

“We are so proud of what Andy has achieved as well as pride in the tremendous team spirit shown by all of our members who have supported and encouraged him both in the gym during training and on the day, or those who donated to SSAFA. He was worried about letting us down, but there was never any doubt he would absolutely smash it.”

Money raised from Andy’s ascent will go to providing SSAFA support to Armed Forces veterans, serving personnel, and their families, when they need it, how they need it, and where they need it. Andy’s Just Giving page is still open, and donations can be made here.