You are here: Home / News / News / Jason’s skydive for SSAFA

Leicestershire’s Jason Pusey completed his skydive over the Bank Holiday weekend and has smashed his target of £250 by so far raising more than £300 for SSAFA, the Armed Forces charity. 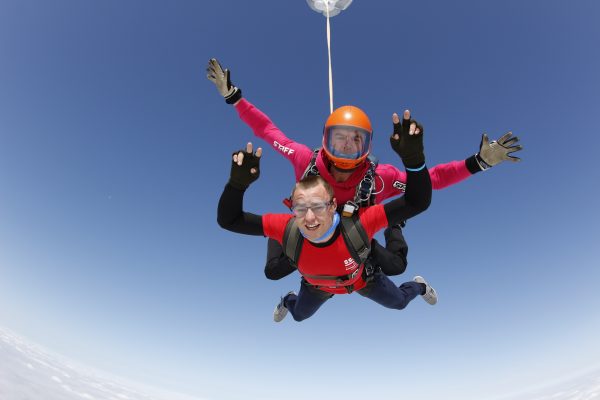 Jason, who has ambitions to join the Army Reserves, chose to jump for SSAFA because of family and friends who have served, and because he wanted to thank the charity for the motivation it has given him to pursue his dream.

Speaking of the jump on August 29, which he did with Skydive Langar from its base at Langar Airfield in Nottinghamshire, Jason said:

“I won’t lie and say I wasn’t nervous, but weirdly the only time I felt scared was the first three seconds of freefall.

“After that, the next 40 or so seconds were some of the best of my life. Even hours after the jump I was still recovering from the adrenaline rush. I used to have a fear of heights, but after those first few seconds of freefall, I knew I was over it and all I could do was just smile throughout the jump.

“I feel with motivation you can push yourself beyond what you thought you were capable of, and just smash your limits. I feel that SSAFA does the same thing; they help people at rock bottom and light the fuse to ignite that motivation.

“I’ve certainly come a long way with the help of SSAFA.”

You can still donate to Jason’s skydive and help SSAFA support more people, then visit: justgiving.com/fundraising/jason-pusey.