Jennifer Davies turned 70 over Remembrance weekend and has chosen to hold a celebration concert in aid of a charity very close to her heart.

Jen has chosen to celebrate her birthday with not only her large family but extends a warm welcome to anyone keen to listen to the talented Warminster Military Wives Choir and one of the best bands in the country: the Bratton Silver Band. The audience will be delighted by a mixture of songs from Remembrance, Elgar’s ‘The Snow’, ‘Bring Him Home’ from Les Miserables, as well as other show tunes, love songs and even a few Christmas numbers that they can sing along to. 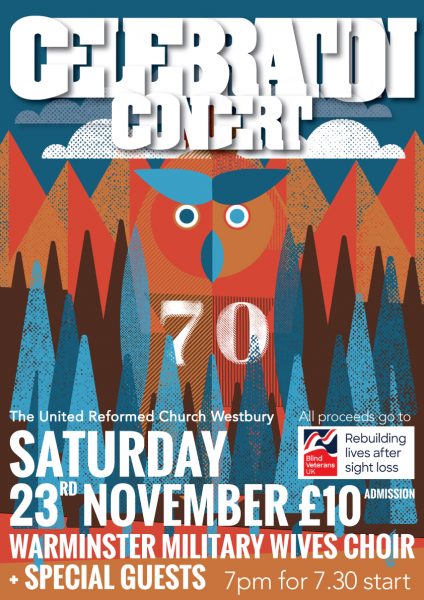 Olwen Clark, Jen’s mother, and Idris Evans, her uncle, both received care and support from the military charity Blind Veterans UK. Originally coming from the Penarth area of South Wales, Olwen was drafted to the RAF on her 20th birthday in 1942 when she was living and working in a shop in Brecon, having been sent there to avoid the wartime bombings.

“She said she was just a girl from a little Welsh village, so didn’t feel like she belonged with the louder city girls in the RAF,” said Jen of her mother. “She hated being in the RAF, but later realised that it all made sense; if she hadn’t served in the Forces, she would never have come to Blind Veterans UK. She loved it there, especially Christmases in the centre in Brighton, and visits to the Llandudno centre with my uncle. They always spoke in Welsh to each other to wind the staff up.”

Her uncle, who was blind and deaf, lived at the Brighton centre for five years before he passed away at the turn of the year aged 102. Olwen visited the centre two or three times a year, before she, too, died one Boxing Day.

“When Mum passed away the staff were wonderful with us, and I think they were as shocked as we were at the time,” Jen said. “Mum loved it there, so we think of it as a happy place. Mum and Uncle Idris received so much support and care, I am happy to give something back to say ‘thank you’.”

The Celebration Concert takes place at The United Reformed Church in Westbury, Wiltshire with doors opening at 7pm for a 7:30pm start on Saturday 23 November. There is wheelchair access. Tickets are £10 on the door. All proceeds go to Blind Veterans UK.

A poster of the event, designed by Jennifer Davies’ son, Jon Davies.