With knitting needles and crochet kits in hand, Partners and customers from John Lewis & Partners have been working tirelessly for almost half a year to take on the Poppy Challenge of producing 2,018 poppies to raise funds for and raise awareness of the work of leading Armed Forces charity Poppyscotland. Incredibly, not only was the challenge duly accepted, but it has now been smashed as the “Totaliser” edges close to the 3,500-mark.

The challenge was the idea of John Lewis & Partners Community Liaison Coordinator Judith Hunter. Judith, who has worked at the historic Edinburgh store for more than 35 years, explained: “The task was to encourage our Partners and customers to knit or crochet 2,018 poppies in time for Remembrance. We wanted people to know that poppies are not just for November; but that those leaving the Armed Forces need help and funding all year round.”

Hundreds of the poppies are being gathered together in the store to create a giant display of the number “100”. The rest will be available for customers to take home – hopefully after they have given a donation to Poppyscotland, which will provide vital funds to support the Armed Forces community living in Scotland today.

Incredibly, the number of poppies that have been knitted and crocheted is fast approaching the 3,500-mark – smashing the original target of 2,018 – and a number of the retailer’s other stores have got on board and have been sent poppy pattern packs from Judith and the team. “I knew our Partners and customers would rise to the challenge! Everybody is talking poppies and there is a real buzz around the place with a fantastic sense of community,” added Judith.

Leading the way has been John Lewis & Partners Selling Partner SJ Milne, who has crocheted a whopping 430 poppies by herself. SJ said: “I come from a military family. My father was in the Air Force for 40 years so I really wanted to be a part of this special challenge. 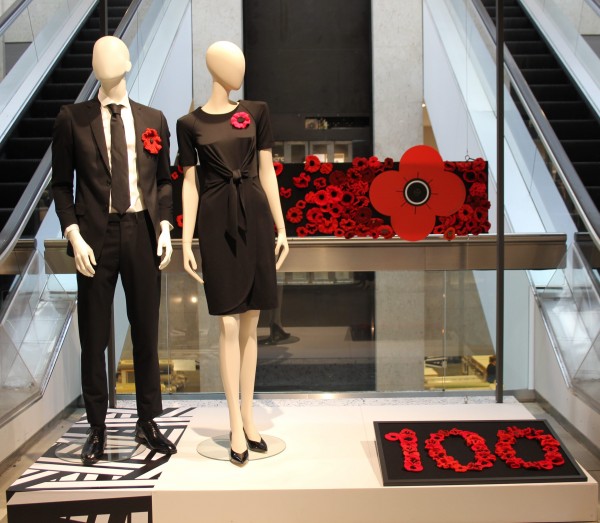 “I only learned to crochet a couple of years ago, but I wasn’t going to let that stop me. I am producing poppies whenever I can and I manage to make three on the bus on the way to work. I notice other passengers looking at what I am doing and that can only be a good thing for raising awareness of the poppy because it is something that is important all year round and not just at Remembrance time.”

Gordon Michie, the Head of Fundraising at Poppyscotland, said: “We are all well aware of the significance of this centenary year, and it is heartening to see so many communities and groups coming together to recognise this anniversary in their own way.

“The foresight of the team in John Lewis is awe-inspiring. They have prepared early and tackled what looked like a considerable challenge with relative ease. Being afforded the appropriate amount of time has allowed them to break their already ambitious target and produce so many more knitted poppies. This has been a fantastically worthwhile project, but the fact that it is likely to raise vital funds to help the Armed Forces community living in Scotland is a further boon.”