You are here: Home / News / News / Join Alabaré for ‘Flags of Thanks’ Exhibition

Join Alabaré for ‘Flags of Thanks’ Exhibition

Alabaré are delighted to have teamed up with the BBC’s Sewing Soldier, Lt. Col. Neil Stace to create the incredible exhibition ‘Flags of Thanks’. The collaborative event will take place in the week long build up to the 2019 National Armed Forces Day celebrations hosted in Salisbury.

Between the 24 and 30 June, the public are invited along to view over 1,000 flags that will be displayed at St. Thomas’s church in Salisbury city centre. 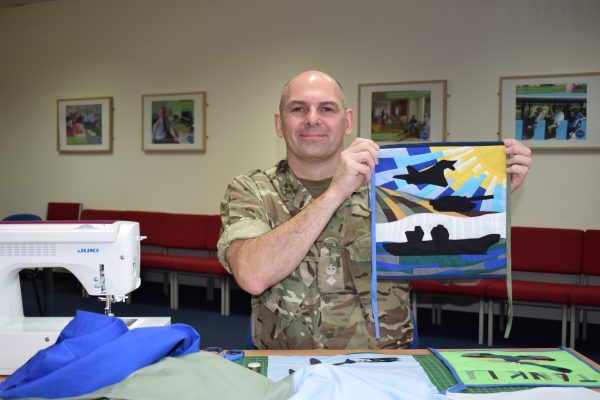 The hand crafted flags have been created by passionate members of the general public from across the UK and further afield. Each flag is a very personal expression of gratitude to the Armed Forces Community, from those currently serving, to Veterans and cadets.

The exhibition will be open to the public from Monday 24th June to Sunday 30th June from 9am until 5pm (or later). Exact opening times are available at – www.flagsofthanks.org.

After the exhibition, the general public will be able to sponsor having a flag made into a practical item, such as a sleeping bag or quilt. Their sponsorship will go towards Alabaré’s Homes for Veterans, helping to change the lives of Armed Forces Veterans who are  homeless and vulnerable.

Lt. Col. Neil Stace, also known as the Sewing Soldier following his appearance on the BBCs Sewing Bee, has been spearheading the project, running workshops with schools and community groups and will be transforming the flags into quilts, sleeping bags and ponchos.

Lt. Col. Neil Stace says; “It has been a privilege to support Alabaré in their Flags of Thanks project. We have been overwhelmed by the amazing designs that we have received and such heartfelt messages of thanks.  We are excited to share what is sure to be a moving tribute to our Armed Forces.”