You are here: Home / News / News / Join us for the Greatest Salute to commemorate the Battle of Britain

The Royal Air Forces Association is inviting the public to mark the 80th anniversary of the end of the Battle of Britain by documenting their gratitude to all the men and women who, by working in a wide variety of roles, contributed to the battle’s outcome. 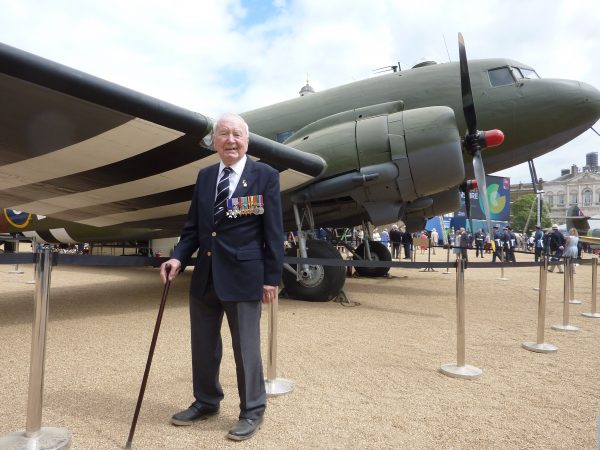 The Royal Air Forces Association, which supports the wellbeing of the RAF family, wants as many people as possible to write thank you notes to pay tribute to ‘the many’, as well as to ‘the few’ – the RAF pilots who fought the Luftwaffe in Britain’s skies between July and October 1940.

Several celebrities, RAF veterans and serving personnel, including Red Arrows pilot Flt Lt Nick Critchell, are among those to have already given tributes as part of the charity’s Greatest Salute initiative, logging their appreciation to the thousands of wartime workers in countless ground-based RAF and civilian roles.

Rory, who lives in Lincolnshire – home to more than 40 RAF stations and airfields during the Second World War – said:

“It may be 80 years since the Battle of Britain, but the heroic and selfless deeds of so many people will never be forgotten.

“I dedicate my ‘Greatest Salute’ to every single individual who contributed to securing victory – engineers, operations staff, medical personnel and postal workers, just to name a few. Their incredible courage, resilience and sacrifice is an example to us all, and I can’t thank them enough.”

Rory’s words, along with those submitted by everyone else taking part in the RAF Association’s Greatest Salute, will be printed and put inside a time capsule to be buried at the National Memorial Arboretum in October. It is hoped that the capsule will be dug-up in decades’ time so that future generations can experience the groundswell of appreciation felt by people in 2020.

Douglas Newham (98) is among ‘the many’ whose wartime ground-based roles supported the Battle of Britain victory, and to whom the nation is being encouraged to pay tribute. In 1940, Douglas was working as a civilian for the Post Office Engineering Research Station – a government communication research and development facility.

Douglas, who now lives in Cumbria, said: “Our work involved the design and production of a back-up synchronising system for the early warning radar network, in case the primary system was disrupted by bombing. Radar stations were, of course, vital in the control of Fighter Command during the Battle of Britain.

“My own work, as a junior technician, included working visits to Fighter Command HQ and to about half of the individual Chain Home radar sites.”

Douglas recalls seeing a German Ju 87 dive-bomber overhead one day as he worked at a Chain Home station in Kent. He said:

“I was a very young man at the time, and, while the experience of being dive-bombed at close quarters was certainly a unique experience for me, I had to carry on with my work. Most of the radar stations were bombed repeatedly, and many WAAF radar operators lost their lives.”

Douglas was also a member of the Air Raid Precaution (ARP) organisation, helping to counter some of the effects of the Battle of Britain air raids on local communities.

“On one occasion I had to decide which emergency service to call first when a bomb smashed a crater into a road. A gas main was alight, water was gushing from a broken pipe, and a nearby house was going up in flames. Those were very challenging times indeed.”

Douglas went on to join the RAF in 1941 as an Air Observer, combining the roles of navigator, bomb-aimer and gunner, initially serving on Wellington and Halifax bombers in England and North Africa. He then became an instructor before serving on Dakota transport aircraft in India and Burma towards the end of the war.

In writing his own note of thanks to go into the RAF Association time capsule, Douglas said:

“I pay tribute to the efforts of everyone who participated in the Battle of Britain. I want to thank the pilots who fought against the formations of Nazi bombers and fighters, the crews who bombed the fleets of invasion barges along the Continental coast, and their fitters, riggers and armourers.

“I also pay tribute to the WAAF members working at the radar sites, the sector controllers whose skills positioned our fighters to best advantage, members of the Royal Observer Corps, the airmen and women of RAF Balloon Command, the Army and Navy units involved, as well as all the civilian organisations and medical services.

“It was ‘the few’ – the Battle of Britain pilots – who captured the admiration and gratitude of our nation, but there were also ‘the many’, whose contributions to victory were also of great significance.”

The RAF Association’s president, Air Marshal Sir Baz North, said it was important that future generations understood not only the contribution of everyone involved in the Battle of Britain, but also the admiration felt for those wartime workers by people living in 2020.

“We hope that thousands of thank you notes written by members of the public will go into the Association’s time capsule, so that our gratitude is documented and itself becomes a piece of history.”

People can write and submit their notes of thanks for inclusion in the time capsule by visiting battleofbritain.rafa.org.uk.