You are here: Home / News / News / Kilmarnock-born Kirsty invested as a Commander of the British Empire

Kilmarnock-born Kirsty invested as a Commander of the British Empire

During a ceremony at Buckingham Palace, Kirsty Bushell, the National Vice Chair of SSAFA, the Armed Forces charity was invested as a Commander of the British Empire (CBE). The presentation was made by Prince William, the Duke of Cambridge. 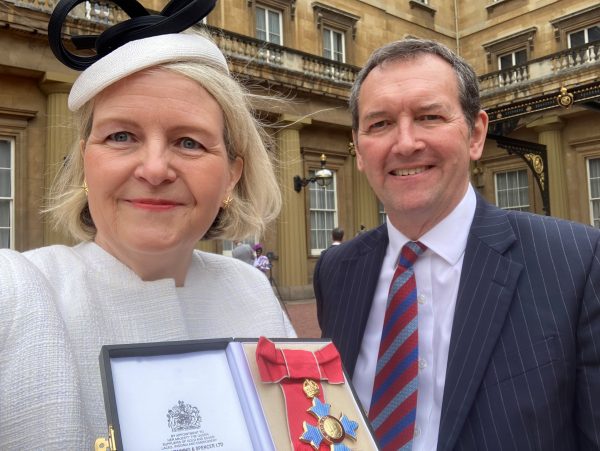 Kilmarnock-born Kirsty, a former RAF Wing Commander, was made a CBE in the 2022 New Year Honours List in recognition of her 10 years spearheading the strategic direction of SSAFA, and of more than 30 years’ voluntary work for the organisation.

“Kirsty has proved inspirational in the role of National Vice Chair of SSAFA by playing a pivotal role in transforming the Charity, being instrumental in the creation of the Military Wives Choirs Foundation and in doggedly furthering the cause of women and families within the Armed Forces Community. Hundreds of families with additional needs children, many suffering relationship breakdowns, hundreds of wounded, injured and sick service personnel, and thousands of female choristers have had their lives improved by her eloquent and persuasive advocacy on their behalf.”

Kirsty, née Gibson, attended Kilmarnock Academy from 1981 to 1987, and from Caprington, her late father Fleming was President of Caprington Golf Club, and her late mother Marion née Collins, was from the town.

She credits her young involvement in the Guides and Venture Scouts for her future success, saying:

“It was a great start for military service and for volunteering, which has led to me being with SSAFA – a tremendous organisation that I am proud to be associated with – for more than 30 years.

“And on another note, as former RAF myself, I was especially delighted to see Prince William in his RAF uniform at my investiture!”

SSAFA, the UK’s oldest tri-service charity, has been here for the Armed Forces’ community for 137 years, providing support for serving personnel, veterans, and their families when, where, and how they need it.