You are here: Home / News / News / “Knowing that Scotty’s Little Soldiers would have been there for my children, if something had happened to me, is what inspired me to do this challenge”

“Knowing that Scotty’s Little Soldiers would have been there for my children, if something had happened to me, is what inspired me to do this challenge”

Jacque Morrow, Staff Sergeant in the British Army, is one inspirational woman. This month, the mother of two, from Upavon in Wiltshire, is setting herself the challenge of rowing the distance of a marathon, just months after overcoming a battle with breast cancer. 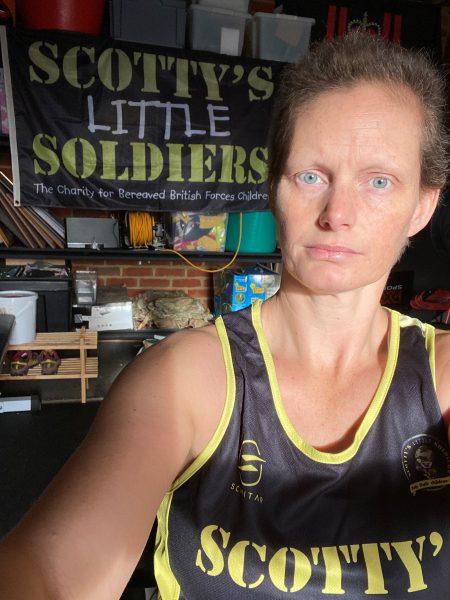 On 19 December, the 43-year-old, who was diagnosed with breast cancer just under a year ago, will be rowing 42,195 metres on an indoor rowing machine all to raise money for a special charity – Scotty’s Little Soldiers.

A mother of two young children, aged 13 and 10, Jacque instantly knew she wanted to do something to raise money for Scotty’s. The charity offers integral support to hundreds of children and young people across the UK who have lost a parent who served in the British Armed Forces, and would have been there for Jacque’s children if the worst had happened.

After being told she was cancer free in July, Jacque set her mind to getting back in shape, setting herself the goal of rowing the longest distance she’s ever completed.

“Over the last year my children have seen me lose my hair, they endured me being admitted to hospital with sepsis and generally saw me not being myself, this is what the treatment was doing to me. The reason as to why was very clear to them both and they remained ever hopeful that I would make a full recovery. Moving forward, I have made a complete recovery, but the most sole destroying part of this illness was the question of what if the unthinkable was to happen? What would happen to my wife and kids? How would they cope?

“Not every child can tell the same story of their parents’ survival be it through illness or through conflict, this is the reason I am raising money for this charity. My children are fortunate to still have me around and for that I will be forever thankful.”

No stranger to the rowing machine, Jacque, who has previously competed as part of the Army Rowing Team at the Army Indoor Rowing Championships, will set up her machine at the front of the house, to encourage passers-by to cheer her on.

Jacque will also broadcast her challenge live on Zoom so that her wife Abbi, who is currently deployed in Estonia with the 5 Rifles, can join in and cheer her on, and members at CrossFit Telic in Hartlepool, including her sister-in-law, Terri, can support by rowing intervals.

“I’m really looking forward to it, I’ve been training a lot and feel ready. This is not a race, so if I can complete it in 3 and a half hours and raise a lot of money in the process then I’ll be impressed.”

Jacque is already well on her way to her £1,500 fundraising target. She added: “Scotty’s is such an amazing charity, I hope I can do them proud.”

Scotty’s Little Soldiers was set up in 2010 by war widow Nikki Scott after her husband, Corporal Lee Scott, was killed in action in 2009. Nikki saw the devastating impact on their two young children and wanted to help others in the same situation.

“Jacque is such an inspiration, what an incredible lady and I can’t thank her enough for the effort she’s putting in to raise money. She’s had such a tough year, so to do something so challenging and doing it for Scotty’s is incredibly heart-warming. Our supporters, like Jacque, have been amazing over the last 12 months and we wouldn’t have got through these difficult times without them. It’s because of people like Jacque that we’re able to provide such integral support to children and young people who, at such a young age, have had their world’s turned upside down. I’m grateful to Jacque for everything she’s doing and so pleased to know that she’s come through it all and is now fully recovered.”

By @Cobseo 5 hours ago