You are here: Home / News / News / Lancashire woman runs over 100 miles from her home to North Wales to present cheque to military charity

A woman from St Anne’s in Lancashire has run 103 miles to Blind Veterans UK’s Llandudno Centre of Wellbeing to present a cheque to the national charity for vision-impaired ex-Service men and women which supported her late father. 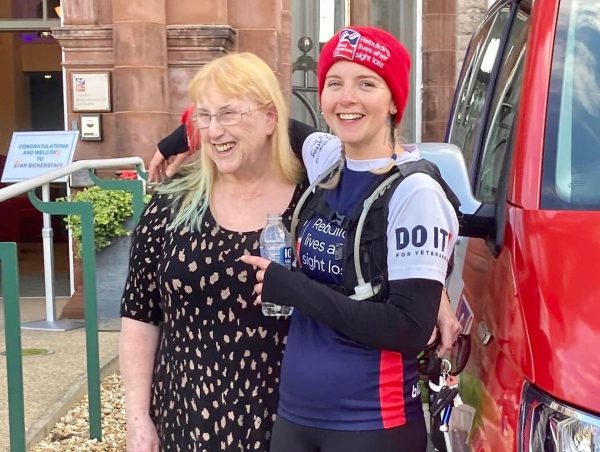 Star Bickerstaff, 29-years-old, has raised £5,000 for the charity through a series of running challenges. On Saturday May 7 she set off from her home and ran through the night for just over 24 hours before arriving at the centre in North Wales at 8.45am on Sunday May 8 where she was greeted by Deputy Care Manager Danielle Trow and the team.

This run has kicked off the training for Star’s next fundraising challenge – the 215-mile Great Britain Ultra Run in August.  Star hopes to raise an additional £1,000 by completing this challenge.

Star’s father, Paul, joined the Queen’s Lancashire Regiment of the British Army in February 1987. Sadly he began to lose his sight due to Multiple Sclerosis (MS). He fortunately found out about Blind Veterans UK and began to receive support from the charity in 2015.

“By the time I was ten, dad was no longer able to care for himself and I helped to look after my wonderful dad. He was, and will always be, my biggest hero and the bravest man I know.

“Blind Veterans UK is a charity close to my heart because they really do help and I want to contribute in anyway I can to ensure that others like my dad can continue to be supported.

“I’m sure anyone who has cared for a loved one and lost them will understand, the death of my dad left a huge void to fill and an identity to rebuild. I had always been known as the girl who cared for her father. I was no longer that girl but didn’t want to lose that connection with my dad so my focus is now on helping others like him by raising funds for Blind Veterans UK.”

Before Paul passed away in June 2020, he was a regular visitor to Blind Veterans UK’s Llandudno Centre. Star said:

“It was there for the first time that myself and mum received help with his care.

“Not only did they provide some well-deserved respite for my mum, but they also took the time to get to know my dad and supported him in being able to revisit interests he had been unable to enjoy since becoming ill and losing his sight.

“The charity also provided specialist IT equipment and software so he could use a computer, ensuring he received all the training and support he needed to be a confident user.”

“This is the first time I’d been to the centre since Dad died. It was an emotional day and brought back a lot of memories. I only stayed for about an hour as I was exhausted from the run but I feel honoured to have had the opportunity to spend some time there with the staff and other blind veterans talking about my dad and reliving happy moments.

“I was also surprised at the finishing line by my mum who I wasn’t expecting to be there, I’m so glad that she was as it meant I held my emotions together for her.

“If dad had lived for another 20 years, Blind Veterans UK would have been by his side supporting him, providing him with equipment and taking him out on trips that mum and I wouldn’t have been able to do.

“Everything I do will always be in memory of my hero and in support of all the heroes supported by Blind Veterans UK. As long as I am able to keep running, I will keep doing it for this incredible charity.”