“Looking out to starboard, I saw a flotilla of orange life rafts and having selected my target raft, slid down the side and entered the water.” 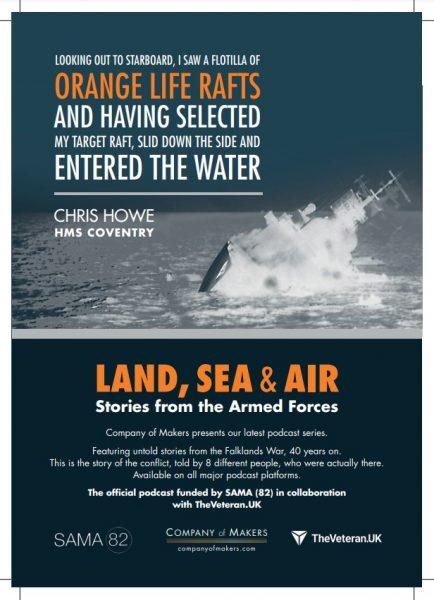 Land, Sea & Air: Stories from the Armed Forces, is a podcast produced by Portsmouth based Company of Makers (CoM), a social enterprise that exists to support ex-Service personnel struggling on Civvy Street.

To mark the anniversary of the Falklands War, CoM have released an 8 part Falklands Special where we hear untold stories from the war, 40 years on.

Hosted by former submariner Mike Davis-Marks and CoM co-founder Steve Bomford. This is the story of the conflict, told by 8 different people, who were actually there:

Ep1:     British Sovereign Territory has been Invaded by a Foreign Power

“For the last 40 years, we’ve been trying to get the truth told about what happened on the day that it all kicked off, 2nd April 1982.”

This is the true story of the Royal Marines, NP8901.

Ep2:     The Dockyard is a Worker of Miracles

This is the story of the dockyard workers who rose to that challenge.

This is the astonishing story of how a North Sea passenger ferry and her civilian crew, Served in the thick of the firing, bombs and air attacks of The Falklands.

“We needed to do something and Goose Green was the something that we did.”

This is the story of 2 Para.

“…we had the unenviable task of having to sink The Sir Galahad…as a War Grave…When the torpedoes were fired, there was just complete silence…”

Imagine having to sink your own ship. We hear the poignant story of HMS Onyx, the only diesel-electric submarine that Served during the war.

Ep6:     None of Us Believed it Would Really Happen

We hear the story of HMS Coventry’s helicopter team.

Falkland Islander, Carol Phillips, had 3 small children, “My first thought was…’Are they going to…machine gun us all down?’” My Dad…kept saying, ‘Don’t let them see you’re scared…The British Bulldogs are on their way.’”

This is the official podcast funded by the South Atlantic Medal Association, SAMA (82).

Available on all major podcast platforms, for free, on demand: https://podcasts.apple.com/gb/podcast/land-sea-air-stories-from-the-armed-forces/id1513953407

Company of Makers would love to hear from you: steve@companyofmakers.com