A pair from Kirkcudbright Training Centre in Dundrennan have raised more than £1,100 for SSAFA, the Armed Forces charity, by climbing Mount Snowdon in North Wales – more than doubling their target, with the amount still climbing. 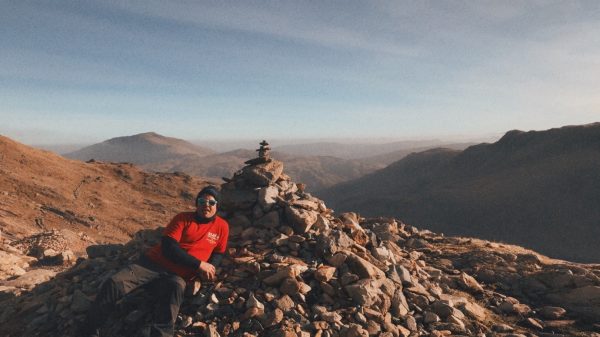 Lee Worrall, Maintenance Technician for Landmarc Support Services (Landmarc), and WO2 Scott Maclean, Deputy Training Safety Officer for the Defence Infrastructure Organisation (DIO), made their challenging ascent and descent of the 1,085-metre peak, setting off before daybreak.

Explaining their reasons for taking on this challenge, Lee said:

“SSAFA is a fantastic charity that supports our Armed Forces during times of need. Any money donated will go towards supporting regulars and reserves in the Royal Navy, the Royal Marines, the British Army and the Royal Air Force and their families, as well as anyone who has completed National Service.

“Scott and I both wanted to raise money for charity by doing something that we wouldn’t normally do. The whole thing was a little out of my comfort zone, but it was an amazing experience, and I felt a massive sense of achievement once we had completed it.”

Scott said: “Lee and I would like to thank everyone for their kind donations. Our initial target of £500 has more than doubled, with our running total made up from a mixture of online pledges and local fundraising, now at £1,120 and donations are still coming in.”

He added that they amended their original route, taking the Miners Path followed by the Pyg Path, saying:

“This made things more difficult but the views were spectacular. The weather was cold but beautifully sunny with some snow at the summit.

“Lee and I felt every step, and Lee has vowed, ‘Never again!’, but I reckon we can force that issue!”

“On behalf of SSAFA, the Armed Forces charity I’ve got to give a big shout out to Lee and Scott, as well as Landmarc and the Defence Infrastructure Organisation, for this amazing effort and amount raised.

“It’s only because of funds raised that SSAFA, the UK’s oldest tri-service charity, can carry on its work of providing practical, emotional, and financial support to our Forces and their families. Lee and Scott’s effort means SSAFA can be there for people in need, from Second World War veterans to those who have served in more recent conflicts or are still currently serving, and their families – any time they need us, in any way they need us, for as long as they need us.”