Families were out in force for the Army Families Federation (AFF) Scotland roadshow on 23 March, with people travelling from as far as Glasgow and Penicuik.

Colonel Charles Wallace, Deputy Commander HQ 51 Brigade and HQ Scotland, and AFF Chief Executive Sara Baade chaired the charity’s formal Q&A session. This lively debate featured questions from spouses and soldiers on local issues including the removal of the bus service for families in Kinloss and Inverness, education in Scotland and possible issues for F&C soldiers if Scotland becomes independent.

Wider issues such as the future accommodation model (FAM) were also raised and the panel responded to all questions from both a military and family perspective.

AFF Regional Manager North Annabel Ingram said, “The main issue of the day was education and this mirrored the feedback we received in our recent Scotland survey. Spouses raised concerns about school places, curriculum differences and the later starting age for children in Scotland. AFF plans to look at this issue, along with all other questions asked, in more detail.” 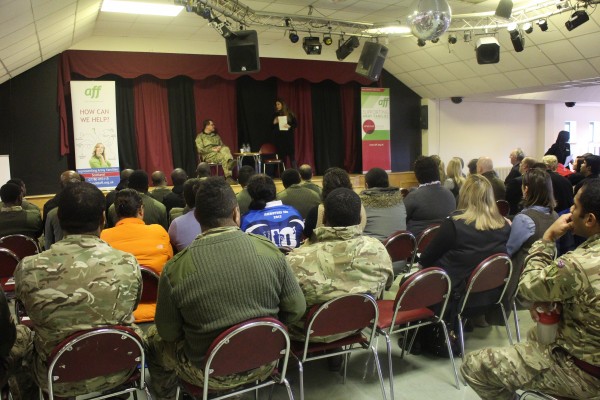 There was luck in the air for three attendees who each won an Amazon voucher in AFF’s prize draw. A noisy lunch showed that many conversations were taking place between AFF staff, families, chain of command and stallholders.

AFF was delighted with the success of this family event and would like to thank the welfare team in Kinloss for their support, as well the families who attended – many of whom stayed for the whole morning.

For further updates on the issues that were raised, go to www.aff.org.uk or catch AFF on Facebook and Twitter. If you would like to discuss family life in Scotland in more detail, please contact AFF Scotland Co-ordinator Zoe Teale at scotland@aff.org.uk