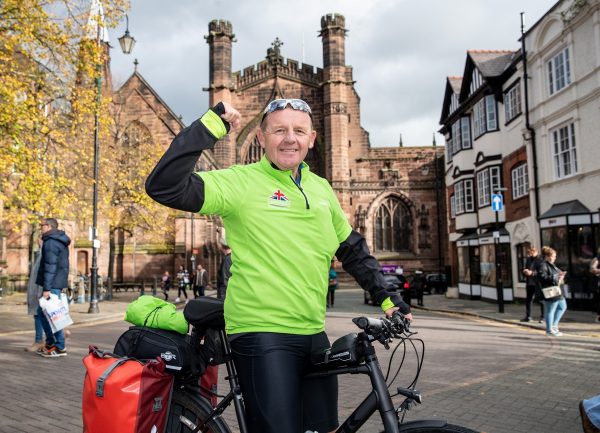 Gary, from Llangollen in Wales, started his journey from Chepstow on Monday 18 October and completed his challenge outside Chester Cathedral on Friday afternoon.

The aim of his challenge was to raise awareness of homeless veterans and funds for his two chosen charities, Launchpad and The Royal British Legion.

Both veterans who joined Gary were previously homeless until they found Launchpad, which provides accommodation and support to veterans to help them stabilise their lives and make a successful transition from military to civilian life. The charity has two houses in Liverpool and Newcastle upon Tyne and have supported over 525 veterans since it opened in 2013.

The veterans, who were accompanied by members of staff from Launchpad, met Gary at Flint Castle and cycled with him on his final few miles into Chester. They cycled on bikes that Launchpad purchased thanks to funding secured by BFBS (British Forces Broadcasting Service), as part of its annual Big Salute campaign.

Gary, a Royal Navy Reservist who served 34 years in the Royal Navy, battled winds of up to 50mph, horizontal rain and hailstones but was pleased to see the finish line and successfully complete his challenge.

Gary who cycled up to 60 miles per day, said:

“The aim of the challenge was to raise vital funds and awareness for two very worthy causes. No veteran should be homeless. For most veterans, leaving the armed forces is smooth but more often than not, those few who can’t resettle easily face challenges such as homelessness, poverty, mental and physical health issues, addictions, broken families and unemployment.

“It was great to join up with some of the residents and staff from Speke House for the last 15 miles or so into Chester and it felt great to see the cathedral as the finish line!

“This challenge has given me a lot of time to think and is really close to me especially with Remembrance Day in two weeks’ time. Thank you to everyone who has donated, their kind words of encouragement and provided their generous hospitality and friendship along the route.”

“This is a fantastic achievement, well done Gary. On behalf of everyone at Launchpad, I’d like to say that we really appreciate his endeavour and to thank donors who have supported him and the charities.  I’m sure he has also raised awareness of the difficulties some veterans face when they leave the military. I am sure it was a great experience for our residents to join him on Friday.”

Gary has raised over £2,500 and you can still make a donation via his Just Giving page at: www.justgiving.com/fundraising/garyperritoncycle

To help boost his funds, he is also auctioning a few items including a Liverpool FC shirt signed by Sir Kenny Dalglish, a Cardiff Blues shirt signed by the team, a game of golf for four at Vale of Llangollen golf course and a vintage bottle of port. The auction will close on Sunday 7 November and more information is in the Just Giving link.