You are here: Home / News / News / Leeds blind veteran to march at Cenotaph on Remembrance Sunday

Leeds blind veteran to march at Cenotaph on Remembrance Sunday 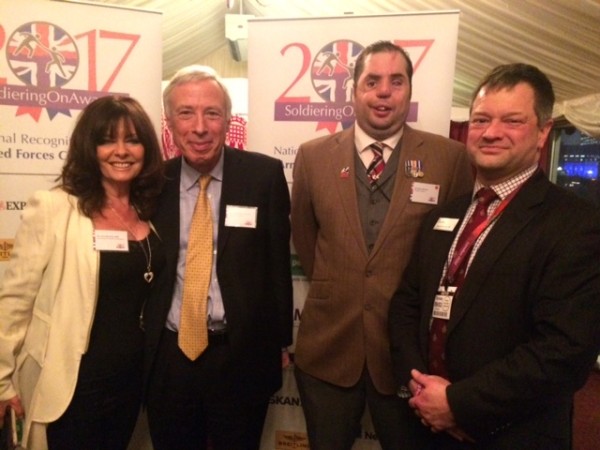 A blind veteran from Leeds is set to march at the Cenotaph in London this Remembrance Sunday (12/11) with the charity Blind Veterans UK.

Simon Brown, 38, is being supported to do this by his local Specsavers store in Selby. The store will be raising money from 6 to 12 November to help send blind veterans, including Simon, to march.

Simon will be marching at the Cenotaph in London with more than 100 other blind veterans supported by Blind Veterans UK, the national charity for vision-impaired ex-Service men and women. Simon’s guide, Tim White, is a fellow ex-Serviceman, and also from Yorkshire.

Simon says: “It is a huge privilege to march with veterans and Service personnel from all generations and conflicts. We have a shared sense of being and are all there for the same reason. A massive thank you from all of us has to go to Blind Veterans UK and the Specsavers stores that make it possible.

“It is always very emotional and during the two minutes’ silence I think about my time in the Service and all the people I served with. My mind particularly goes to the family of a great friend and mentor who sadly lost his life in Service for his country.”

Simon joined the Army in May 1997 as a mechanic in the Royal Electrical and Mechanical Engineers. It was almost 11 years ago, when he was a Corporal on tour in Iraq that Simon’s life changed forever.

On 6 December 2006, after Simon had successfully led a mission to rescue six stranded soldiers in Basra, he was shot in the face by a sniper.

The bullet entered Simon’s left cheek and exited through his right, causing severe facial injuries. Simon was given emergency treatment in Basra and put into an induced coma.

Seventeen days later, Simon woke up in Selly Oak Hospital in Birmingham, where he was told that his left eye was destroyed and there was little hope for sight in his right eye.

Simon says: “That was the point when my world fell apart. When I heard the four words, ‘You’ve lost your sight,’ it sounded to me like my life was over.”

Fortunately Simon found out about Blind Veterans UK and started to receive free practical support from the charity. This included a rehabilitation programme to help him adjust to sight loss and go on to live independently.

Simon says: “As well as all the invaluable and practical support offered by Blind Veterans UK, it was the sense of belonging and understanding from its community that’s really helped me stay positive.”

Since his injury, Simon has dedicated himself to working with charitable and voluntary organisations and using his experience to motivate others.

Six years after Simon first started to receive the charity’s free support, he started working full time in Blind Veterans UK’s Headquarters as a Communications and Engagement Officer, responsible for reaching out to more blind veterans who could benefit from the charity’s support.

In the past year Simon has spoken about his experience with Blind Veterans UK at over 70 events, ranging from national conferences to local support groups, from Glasgow to Jersey.

Simon is set to march with other vision-impaired ex-Service men and women supported by Blind Veterans UK as part of the national Remembrance Sunday commemorations in London on Sunday 12 November 2017. The Selby Specsavers store will be raising money to help get Selby and all the other blind veterans there. The store will be collecting in-store donations.  You can support their activity by visiting blindveterans.org.uk/helpsimon.