On 18 June 1921, with the trauma and painful after-effects of the First World War crippling the nation, four ex-service organisations came together at St Cuthbert’s Church in Edinburgh to unite for the greater good of the nation. At that moment, the British Legion was born and today, 100 years later, a year of centenary celebrations is being launched in recognition of this historic, national institution. 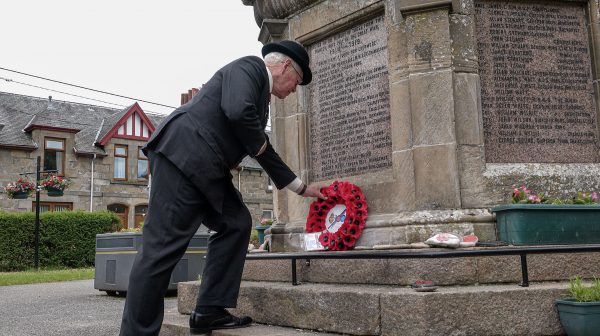 The Unity Conference, led by Field Marshall Earl Haig, set out to bring members of the Armed Forces and wider community together in the spirit of comradeship. His vision was for a cohesive, single organisation with a democratic constitution that brought likeminded individuals together for a common purpose—to champion the rights of veterans and their families.

Some of the earliest work carried out by the Legion was to help returned servicemen, or their widows, obtain their due pensions. They also engaged with the Ministry of Labour Department to help support veterans find suitable employment. Today, Legion Scotland remains at the heart of the military community, providing support and solidarity. Legion Scotland also ensures the memory of those who fell in the First World War, and every conflict since, is never forgotten.

“We are extremely proud to have reached our centenary year. It is a momentous occasion, not only for us as an organisation but for the wider public. Since our formation, the Legion has stood as a collective voice for the ex-service community in Scotland and this continues today. Although we were founded in the aftermath of the Great War, there have been many conflicts since, and it’s vital that all veterans are supported and remembered regardless of when and where they served.

“Legion Scotland’s heart is in local communities with more than 20,000 members, 142 branches and 60 clubs in towns and villages across the country. No national or local wreath-laying ceremony would be complete without Legion representation and while many people associate November as the time of remembrance, we ensure that war memorials all over Scotland remain an important focal point for commemorations throughout the year.

“Today we are delighted to kick off our centenary celebration by honouring those that came before us, those that will come after us and most importantly all of the men and women in Scotland who have served and are serving our nation.”

Today at 11am, a socially distanced service of celebration and commemoration was held at St Cuthbert’s Church, led by Reverend Dr Karen Campbell BD(Hons) MTh DMin National Chaplain of the Royal British Legion Scotland and Legion Scotland National Chairman, with representatives from the Armed Forces, Merchant Navy, The War Widows and Poppyscotland in attendance. Simultaneously, over 100 commemorative centenary wreaths will be laid at war memorials across the country by branch and club members as the entire Legion family comes together to mark the momentous milestone.

This will be followed by an exciting programme of centenary activity throughout the remainder of 2021, starting with a Legion Scotland’s Riders Branch tour of Scotland. The ‘National Ride Out’ will leave from St Cuthbert’s today and, over the course of the summer, travel the length and breadth of Scotland visiting every Legion area in the process. An online auction goes live on Saturday 19 June and includes scores of sought-after items, from a trip for four to the 2022 Masters golf tournament at Augusta and other sporting packages, to rare Poppies from the Tower of London display and other military memorabilia. Bidding starts at just £35, and all money raised will go to support the Legion’s vital work.

COVID restrictions allowing, in September more than 100 pipers will take part in a special Beating Retreat event in Dundee, where the winning entry of Legion Scotland’s pipe tune writing competition will be performed by the massed bands. Then in November there will be a Centenary Concert held at St Cuthbert’s Church that will feature a spectacular military musical line up and special guests.

“Over the last 100 years, Legion Scotland has seen many changes and we have developed and adapted our work to meet the needs of veterans of all ages in an ever-changing military landscape. In 1926, our founder Field Marshal Earl Haig said: ‘We join the Legion not to get anything out of it, but in order to help others’. This ethos is as palpable and important today as it was in the Legion’s early years.

“I’d like to extend my sincerest thanks to everyone from trustees, branch and club members, our other like-minded military organisations, civilians and most importantly, our veterans and Armed Forces community, whom we will continue to honour and remember for the next 100 years.”

The service of celebration at St Cuthbert’s Church and national wreath-laying will be broadcast live today at 11am on the Legion Scotland and Poppyscotland Facebook and Youtube channels. For more information on Legion Scotland and the upcoming centenary events schedule please visit www.legionscotland.org.uk