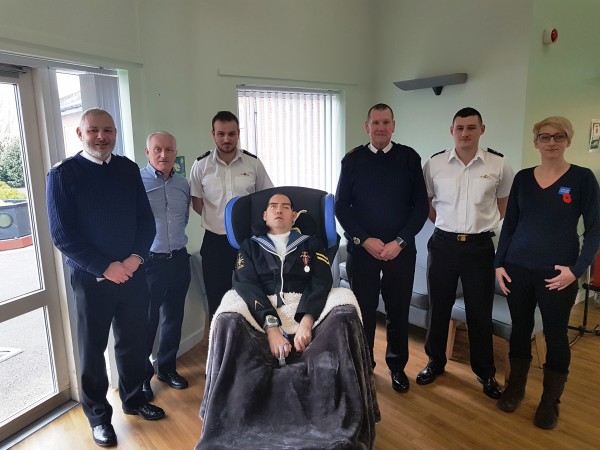 The Royal British Legion has teamed up with the Navy to help improve the life of a former Submariner who was left badly brain damaged following a horrific road collision five years ago.

Paul Reynolds, 41, from Wavertree, Liverpool, was cycling to his naval base in Cumbria in February 2013 when he was struck by a milkman on his early morning round and left with catastrophic head injuries so severe that surgeons had to remove parts of his skull to save his life.

The accident has left Paul unable to walk or talk and he needs specialist round-the-clock care which he receives as an in-patient at St Cyril’s Rehabilitation Unit in Chester. His physio, Andrea Parry from United Rehab Solutions Ltd, suggested Paul’s quality of life would improve with the use of a bespoke wheelchair, which will fully support his shattered pelvis, so the Legion and Paul’s former comrades, raised the £10,000 needed to fund the chair.

Paul’s father, John Reynolds, said:  “I’m delighted that the Legion and Navy have paid for this new chair. It’s hopefully going to make a big difference to Paul as it’s designed specifically to support his pelvis. The hospital has said that Paul won’t fully recover from his injuries as he suffered a high level of brain damage, but we can only try and make him as comfortable as possible. I’m just so grateful to the Legion for being there to support him. I really can’t thank them enough.”

“The last five years have been horrendous and it’s a miracle Paul survived the collision. But it just shows how strong and determined he is – just like he was in the Navy.”

Amanda Brownlie added: “It’s been an honour to join forces with Paul’s former comrades and visit him today. His physios have said this new wheelchair will help improve the quality of his life so we are glad that John turned to the Legion for help.”

Paul Reynolds, 41, from Liverpool, served as a Submariner with the Royal Navy from 2000 to 2013. During that time, he served on several different submarines and ships as a Tactical Submariner based mainly in Scotland. Paul loved his job looking after new recruits and doing fitness training with them. He had also spent 18 months with the Royal Marines as a driver delivering weaponry around the country and was recently back with the Navy in Cumbria when tragedy struck on 27th February 2013.

On that cold winter morning, Paul rode his bike four miles to the naval base in Barrow-in-Furness like he did every morning. Sadly, on this particular day, he collided with a milkman on his round and was thrown into a grass verge. The accident left Paul with severe head injuries, a smashed pelvis, broken jaw and broken leg. He was effectively paralysed down his right side.

“Paul was in such a bad way that the Police told my wife and I that he probably wouldn’t survive,” said Paul’s dad, John.

Paul spent the next six months in a coma at Royal Liverpool Hospital where surgeons removed two parts of his skull to ease the pressure on his brain. He was then transferred to St Cyril’s Rehabilitation Unit in Chester and has been there ever since receiving round-the-clock care.

John said: “For the first few years, Paul was in a comatose state on lots of medication but gradually the doctors have reduced his meds and he is much more alert and aware of things around him. Although he can’t speak, he can communicate with us by pointing at letters to spell out different words. He can’t walk but with continued therapy, the staff are encouraging him to stand up.”

John, whose wife Margaret passed away suddenly in September 2017, visits his son every day.  The retired train driver washes his clothes and helps Paul do his physio.

“Since losing Margaret to lung cancer last year, my sole focus has been Paul – making sure he’s well looked after and getting stronger every day.  Everyone he served with has been left devastated by the accident, his ex-comrades and former CPO Coxswain Tim Clifton have been to see him and have even raised money to help fund his rehabilitation. I’m just thrilled that so many people care for my son and want him to get better.”

In the summer of 2017, Paul’s physiotherapists suggested that he might benefit from a specialist wheelchair that would better support Paul’s posture and breathing, but it came with a hefty price tag of £10,000.

“I’ve been a member of The Royal British Legion for years and I chatted to one of my ex-Army friends about the situation,” said John. “He told me to contact the Legion as they might be able to help fund the chair so I contacted Tim and he got the ball rolling with the charity.”

The Welfare team liaised with Tim and the submariners to jointly fund the wheelchair – £6,000 raised by Paul’s ex-comrades and the remaining £4,000 funded by the Legion.