A group of seven blind veterans from Lincolnshire have hit a milestone of 10 million steps as they continue a challenge designed to maintain wellbeing and fitness following the lockdown period. 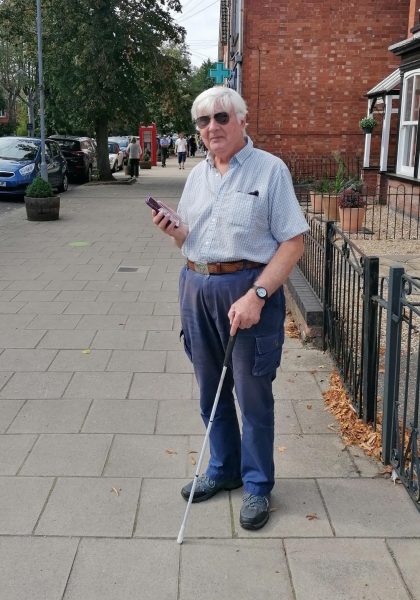 With an average age of 79, the seven ex-Service men and women started their challenge in March and hit 10 million steps this month.

The initiative was launched following concerns around the effect lockdown was having on the physical and mental health of blind veterans in the North East.

“It’s a sad fact that many of the blind veterans we support suffer from social isolation. And the lockdown period meant many of them were getting out of the house even less than before.

“So we sent out talking pedometers to blind veterans who were interested in increasing their step count. And we get together on the telephone every Monday afternoon to log our steps and put the world to rights.

“It’s been a huge success with everyone feeling much better both physically and mentally. And it was brilliant to celebrate our combined 10 million steps together!”

78-year-old John Wilkinson from Woodhall Spa is one of the blind veterans in the group. John spent 13 years with the Royal Signals TA as a Sergeant Radio Technician and started to lose his sight 20 years ago through Macular Degeneration. His sight has been in decline ever since and he is now registered severely sight impaired.

“Being part of the group has been brilliant. It’s given me a purpose to get out and walk. I’m doing around 3 miles a day. I would go further but my knees just won’t allow it.

“I look forward to getting the steps going and catching up with the others every Monday. Woodhall Spa is a beautiful area to walk around and I’m feeling so much fitter and better mentally too.

“I can’t thank Blind Veterans UK enough for setting this initiative up. It’s helped me and the others no end.”