A 100- and 56-mile cycle challenge celebrating the 100th birthday of Squadron Leader George ‘Johnny’ Johnson DFM will take place in Lincolnshire on Saturday 3 July. The ride, which has so far raised more than £100,000 for the RAF Benevolent Fund, pays tribute to Johnny’s links to the county. Johnny is the last surviving Dambuster, having flown in Operation Chastise, during the Second World War, in 1943, setting off from RAF Scampton to destroy three dams at the centre of Germany’s war effort. 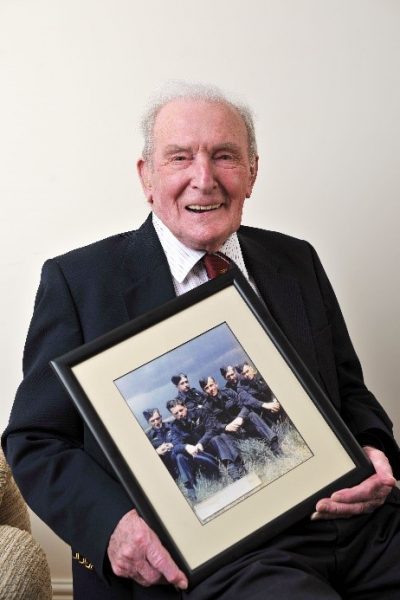 Starting and finishing at the Petwood Hotel in Woodhall Spa, the home of the Dambusters 617 Squadron, the route will also take in RAF Scampton, RAF College Cranwell, and Highfields School in Newark where Johnny taught after leaving the RAF. All proceeds will support the Fund, the RAF’s charity providing support to serving personnel, veterans and their families.

A team of three engineers from RAF Coningsby’s Battle of Britain Memorial Flight, which comprises a Lancaster bomber the aircraft which undertook the devastating raid, will be taking on the 100-mile ride. Corporal Rob Taylor, Sergeant Craig Reynolds and Senior Aircraftman Technician Aidan Summerell will join hundreds of other cyclists pedalling for charity.

“As engineers fortunate enough to work on such iconic aircraft, the Dambusters raid means a lot to the three of us. Our job gives us an amazing link to past and the debt owed to people like Johnny so we’re proud to be giving something back.

“I’m particularly excited to fundraise on behalf of the RAF Benevolent Fund as the charity has supported my family directly. My son recently received his brand-new specialist pushchair that was paid for by the Fund, for which we are incredibly grateful.”

Wing Commander Mike Ainsworth, who is Acting Chief of Staff at the RAF Air Cadets based at RAF College Cranwell, will also be cycling the 100-mile route. Throughout 2021, Mike is cycling 5,600 miles to raise money for the Fund, including three consecutive 100-mile cycles on 30 June-2 July before the Dambusters Ride on 3 July. So far, Mike has covered more than 3,700 miles of his target.

Johnny Johnson has also given his support to the ride. He said:

“I am grateful to have never needed the support of the RAF Benevolent Fund but nonetheless I have always known they are there for those less fortunate than I.

“Not only will this event raise vital funds to support RAF personnel, past and present, it will also pay tribute to the brave men of Bomber Command who made the ultimate sacrifice on the Dambusters raid and throughout the Second World War. Their loss must never be forgotten and it is my hope through this event, a new generation will learn about the cost of the freedom they enjoy today.

“The RAF Benevolent Fund does incredible work supporting RAF veterans and serving personnel and I would like to thank anyone who signs up for this cycle ride.”

The Dambusters were members of the RAF’s 617 Squadron who were specially assembled in March 1943 to bomb three dams in Germany’s Ruhr Valley. The raid, which took place on the night of May 16/17, involved 133 aircrew flying 19 specially adapted Lancaster bombers.

On the weekend of 15 and 16 May, the anniversary of the raid, more than 200 cyclists took part in the Dambusters Ride virtually, completing the 100-mile or 56-mile challenge not only across the UK but also as far afield as Australia, Canada and the UAE. The main event in Lincolnshire was due to take place on the same weekend but was delayed to July due to lockdown restrictions.