You are here: Home / News / News / Liverpool blind veteran to take on 22-mile walk along D-Day beaches for military charity 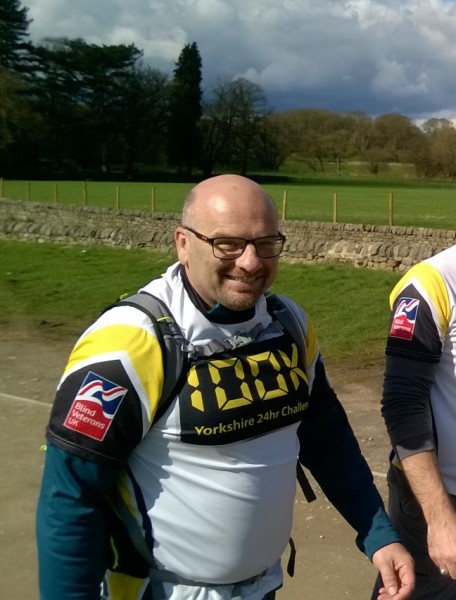 A blind veteran from Liverpool is currently training to take part in a 22-mile walk along on the Normandy coastline to commemorate the anniversary of D-Day.

Mike Johnson, 55 and from Knotty Ash, will take part in the  event alongside five other blind veterans supported by Blind Veterans UK, the national charity for vision-impaired ex-Service men and women. The challenge will take place on 6 June, the anniversary of the 1944 Allied invasion of occupied France.

Mike says: “I feel very honoured to be taking part because while it’s a physical challenge, the event is really about keeping alive the memory of those brave men who lost their lives on the beaches of France.”

Mike joined the Territorial Army in 1992 and became a member of the Liverpool Scottish King’s Regiment. He served until 2005 when his deteriorating vision caused him to leave the Forces.

Mike says: “I loved my time in the TA. I learned a lot and the banter and camaraderie was second to none. It’s a time I always look back on with very fond memories.”

Mike has macular dystrophy, a genetic condition which causes gradual sight loss. He began receiving support from Blind Veterans UK in 2010. He admits he was initially reticent about contacting the charity, which he thought only supported those who had been war-blinded.

Fortunately Mike did eventually get in touch with Blind Veterans UK, and was encouraged by staff to take an introduction course at one of the charity’s training and rehabilitation centres.

Mike says: “After your sight begins to go, you can find yourself at rock bottom. But then you come to visit one of the centres and, no matter how bad you think your situation is, you are surrounded by people who are in exactly the same situation as you who are thriving and learning to get on and live their life. It puts everything into perspective.”

Mike was also given IT training and equipment by Blind Veterans UK, which helped him get up to speed with his office-based job at a local housing trust.

Mike says: “Blind Veterans UK has been brilliant. In those early days the staff assessed my needs and made sure I was given the really critical support I needed. Since then I’ve become very involved with sports and challenges which has built up my confidence, something I think is really important if you’ve experienced sight loss.”

Mike is no stranger to activities like the D-Day 44 Challenge, having taken part in the Blind Veterans UK’s 100K walk in Yorkshire in 2017 and the charity’s battlefield tour to the Menin Gate.

Mike says: “I’ve been training hard to ensure I don’t put the other guys to shame when we get to France. Walking over rough terrain when you have sight loss is a challenge, but it will be definitely be made easier by the camaraderie we all share as blind veterans. I’m sure there will be plenty of banter and I’m very much looking forward to it.”

To support Mike as he takes part in the D-Day 44 Challenge, head to justgiving.com/campaigns/charity/blindveterans/d-day