Llandudno’s Miss Alice has walked ten miles around the town to raise funds for Blind Veterans UK, the national charity for vision-impaired ex-Service men and women. 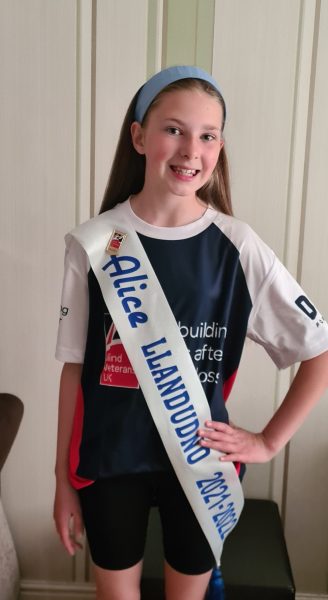 Emmie Holmes, who is 11-years-old and from Llandudno, is the town’s current Miss Alice. As part of the role, Alice has attended a number of public events including an afternoon tea at Blind Veterans UK’s Llandudno Centre of Wellbeing.

“I’ve met Billy a few times and he always makes a fuss of me and bows. When I first met him he told me he was blind and how he lost his sight. He also gave me a cuddly goat called Billy.

“Billy has been a real inspiration. I want to be a dance teacher when I grow up but if I don’t make it as one then I definitely want to work for Blind Veterans UK.”

Emmie set off from Blind Veteran UK’s Llandudno Centre at 9am on Monday May 30 and completed the walk in just over two and a half hours before finishing back at the centre for a Mad Hatter’s Afternoon Tea alongside the residents.

“Blind Veterans UK helps so many people and I wanted to raise money to help this fantastic place.”

“I am so proud of Emmie, I am always proud of her. She has loved looking online at what Blind Veterans UK might be able to buy with the money she has raised and is so happy knowing that her efforts are benefitting such a good cause.

“Spending time with the veterans at the Llandudno Centre has been such a privilege for Emmie and she has personally got so much from hearing their war stories. It will have such a benefit to her learning as she can now relate real experiences to what she is taught in school.”

Emmie has already exceeded her £150 fundraising target. If you would like to support Emmie and help her to raise even more money for Blind Veterans UK you can visit her Just Giving page: justgiving.com/emmiemissalice