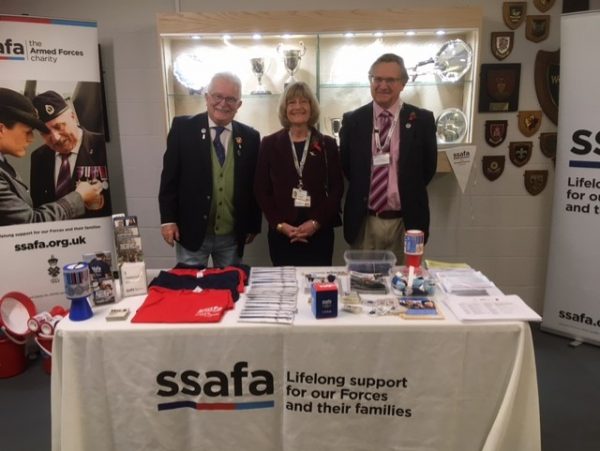 SSAFA Gloucestershire, who support serving personnel, veterans and their families across the local area, were delighted to raise £1,0032.93 at the UK Armed Forces Rugby Remembrance Match against Rugby for Heroes.

UK Armed Forces is the pinnacle of Forces Rugby, drawing the best players from across the Royal Navy, British Army and Royal Air Force.

Rugby for Heroes works with the rugby community to raise funds and awareness for military personnel who are making the transition to civilian life. The Rugby for Heroes squad is headed up by former England layer, and Rugby World Cup winner, Mike Tindal.

“We were delighted to be a part of the UK Armed Forces Rugby Remembrance Match at Kingsholm Stadium last Wednesday to represent SSAFA, the Armed Forces charity.

“It was an excellent evening enjoyed by all and we are most grateful to all of the supporters who helped us raise over £1,000 for SSAFA Gloucestershire, especially the Army Cadets who helped us fundraise on the night. Thank you.”

SSAFA is the official charity partner for UKAF Rugby Union 2021-2022, including this UK Armed Forces Rugby Men Remembrance match against Rugby for Heroes.