Huntingdonshire Concert Band will perform alongside The Band of the Grenadier Guards in the opening concert of ‘the worlds most renowned and iconic military bands’ tour of the UK, in celebration of Her Majesty the Queen’s Platinum Jubilee this summer. 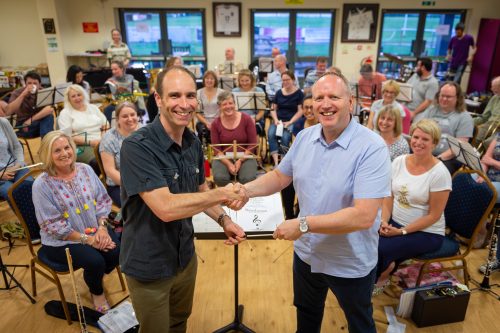 The concert series will see over 80 musicians take to the stage at the purpose-built local performing arts venue, combining the finest professional military musicians and dedicated local players from the well-respected community wind band. To date 5 concerts have been held, raising over £23,000 for the UK’s oldest tri-service charity supporting Armed Forces veterans and their families.

The concert, organised by Huntingdonshire Concert Band (HCB) promises to be a celebration of music for everyone – spanning 70 glorious years, including works by Walton, Rogers & Hammerstein, Bernstein, Coates, Barry and many more.

‘throughout the history of the United Kingdom, the music of the Band of the Grenadier Guards has formed the backdrop to its national life and identity. Today, the band carries this tradition on with precision and pride, never more fervently than during this Jubilee year; providing an opportunity to experience the sight and sound of one of the world’s most renowned and iconic military bands. We are very much looking forward to it and hope our audiences are too’.

‘We are absolutely delighted to welcome Ben back to our home venue with the Band of the Grenadier Guards. My thanks to him too for expertly care-taking HCB during my year away. It will be a celebration of very high-quality musical performance.”

SSAFA has been chosen by HCB to be the charity for this Concert not only for the fantastic work it continues to do, but because of the Forces links with HCB. The band’s founder, Laurie Hurst, was a musician with the RAF for 25 years. The current Musical Director, David McClintock also served as an Army Musician for 9 years, finishing with the premier band of the British Army, The Royal Artillery Band and Orchestra.

Tickets for this concert are £19.50 and can be purchased at https://www.ticketsource.co.uk/pac/t-yrlqnk