Volunteers for SSAFA, the Armed Forces charity in Lincolnshire, up and down the country, and even overseas have had their contributions recognised with the Sir James Gildea Local Award. 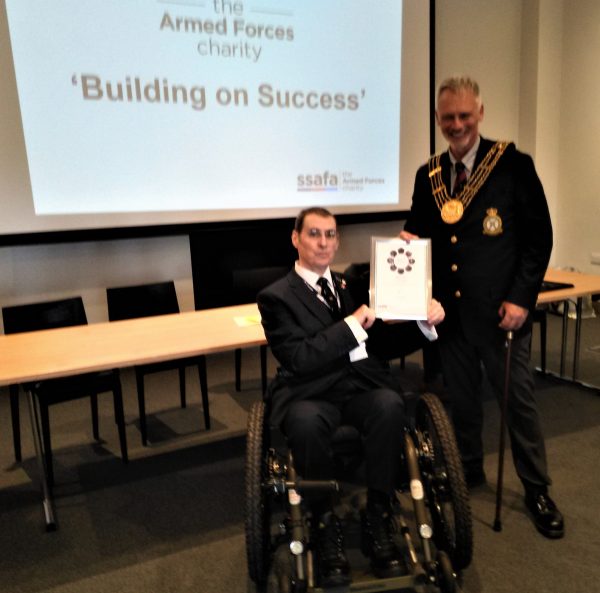 Among those recognised in Lincolnshire was Eugene “Stun” Conlin, 71, a SSAFA volunteer for five years in the Boston and Sleaford Division, who was nominated for his fundraising and awareness raising at events in the county each summer.

The award was made at the branch’s AGM held at International Bomber Command Centre in Lincoln and among others present was Cllr Dean Ward, the Mayor of Grantham, an RAF Regiment veteran, and the Armed Forces Champion with South Kesteven District Council. Cllr Ward also presented Stun with his award.

Stun served in both the RCT and Royal Anglian Regiment as a Corporal from 1970 until 1983. He then joined the RAF Regiment serving as a Senior Aircraftman until 1989. During his time in the Army and the RAF he served in Northern Ireland, Nepal, and Cyprus. His long-term injuries to his lower back and knees were caused while serving as an infantryman.

Stun, who lives in Heckington, uses a specialist wheelchair made by Mountain Trike – his “Machine” as everyone calls it – which was provided by the branch to get around, assisting him to maintain his mobility and independence as he spreads the word about SSAFA.

Of his award, Stun said:

“It goes without saying that I am pretty humbled by being given a Sir James Gildea Award, and something I wasn’t expecting.

“Like all SSAFA volunteers, whether veterans or those with no military experience, have for many, many years, I put in my time to support our Forces’ men and women and their families, helping when, how, and where there need it, and it’s something I’d recommend others to think of doing.”

Andy Ingham, the SSAFA East Midlands Regional Chair and himself a recipient of a Sir James Gildea Local Award, added:

“it was good to see one of our local SSAFA ambassadors honoured by the receipt of a Sir James Gildea Award, Stun does so much to support the Branch in so many ways.​

“This, was our first face-to-face AGM since 2019 and was a great opportunity to meet people again, reflect on our successes and the continued hard work of SSAFA Lincolnshire, and the fantastic contribution made by all our volunteers, while we look to the future.”

For more information, including how to volunteer, visit ssafa.org.uk/Lincolnshire.