Veteran, NHS Nightingale physiotherapist, and SSAFA Fundraiser, Major (Retd) Sally Orange, set herself the arduous challenge of completing 100 laps (100 miles) of the NHS Nightingale Hospital in honour of the inspirational Capt Sir Tom Moore (#CaptainTom100), following his death in February. Sally dedicated each lap to a member of the Armed Forces and NHS worker to thank them for their hard work during the pandemic. However, after the closure of the hospital halfway through the challenge, a heart-warming twist opened Sally’s eyes to more ways she could give back. 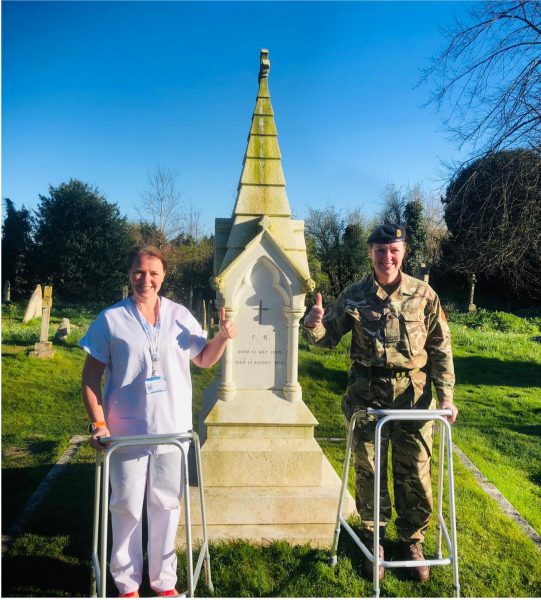 “In keeping with the theme, I chose to run laps starting and finishing at the grave of the legendary nurse known as ‘The Lady with the Lamp’, Florence Nightingale, which is situated at St Margaret’s Church, Wellow, Hampshire.”

I was surprised to learn that the grave was of fellow Army Major, Lesley Boden RLC, who had tragically passed away in her sleep in 2013, whilst 7 months pregnant at the age of 33.”

This struck a real chord with Sally and she knew there would be many others who knew of Lesley on the ‘Sandhurst Sisterhood’ Facebook page, a community of women who have all attended the Royal Military Academy Sandhurst. She left a SSAFA teddy bear at Lesley’s headstone for Mother’s Day along with some flowers and posted about in the group to allow her to be remembered to others.

On doing so, Sally was inundated with messages remembering the fantastic person that Lesley was from those that knew her well and also those that didn’t.

“It turns out that Lesley, like myself, had run the London, New York and Paris marathons and did a lot of fundraising for military charities.  I had been given the little Teddy by a SSAFA member who supported a fundraiser marathon for SSAFA I completed in October. I thought it’d be nice for people to know where some of the SSAFA teddies go”.

One of Lesley’s friends reached out to Sally and asked if she could send the photos to Lesley’s mum. Following this, Sally was put in contact with Angela, Lesley’s mum, who lives in France and has not been able to visit her daughters’ grave over the last year due to the Covid-19 travel restrictions.

“I had a FaceTime call with Angela whilst at the grave one day so she could at least visit it ‘virtually’.  Angela mentioned a bench in the corner of the graveyard that Lesley’s friends had fundraised for, which she usually cleans and varnishes once a year, but obviously hadn’t been able to recently.”

I told her I would do it for her no problem and revarnished the bench. I have been connected with the girls who fundraised for the bench and so they have seen it as well, which is nice. I’ve also tidied up the grave too.

The joy I have got out of restoring a bench for someone who hasn’t been able to do it for themselves due to COVID has been immense, for both Angela and myself. It really is a win-win situation.“

On recently winning the ‘Special’ category, at the prestigious Women in Defence Awards, Sally chose to dedicate the award to Lesley and former colleague Major Mandy Islam RAMC, who sadly lost her battle to cancer in 2019.

“I was so shocked to have won that I could only just get the words out – I had no idea you could get so nervous sitting at your kitchen table on your own.”

A kind act may pass in a moment but the thoughtfulness will be remembered forever, it has been so moving to be able to help Angela.”

The photographs show Lesley’s grave with the SSAFA Teddy bear and the restored bench with the Women in Defence Award and the toast Sally made to the two women who are sadly no longer with us, but who’s memories live on. Lest we forget.

SSAFA, the Armed Forces charity, has been providing lifelong support to our Forces and their families since 1885. If you are from the Armed Forces community and need help, please contact: https://www.ssafa.org.uk/get-help/forcesline