A local volunteer from Crieff has been awarded a Long Service Award on behalf of SSAFA, the Armed Forces charity by The Lord Lieutenant. 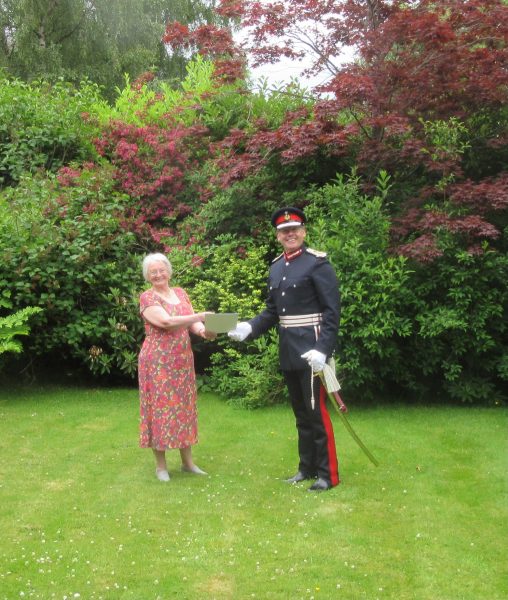 Nancy Johnston was presented with a Long Service Award on Saturday 3 July by HM The Lord Lieutenant of Perth and Kinross, Stephen Leckie, to recognise over 20-years voluntary service to SSAFA, the Armed Forces charity.

“I had known about the work that SSAFA did right from the start of my life as an Army wife as my husband had worked closely with SSAFA Sisters.”

“When he retired after 35 years as an Army Medical officer in 2000, we returned to Scotland and I met someone from the local Branch. Shortly afterwards, I was signed up as a volunteer to support the local Armed Forces community.”

Since joining SSAFA Perth & Kinross, Nancy has obtained the roles of Publicity Officer, Branch Secretary and supported the branch as a Training Officer and Fundraiser.

In 2012, Nancy was awarded the British Empire Medal for her service to SSAFA.

“It was a huge surprise to be awarded the Long Service Award and have it presented by HM The Lord Lieutenant of Perth and Kinross, Stephen Leckie, and his cadet for recognition of 20 years’ service to SSAFA Perth and Kinross.”