You are here: Home / News / News / Lorna Vyse joins Scotty’s Little Soldiers, bringing a wealth of experience in child bereavement and knowledge of the military community

Lorna Vyse joins Scotty’s Little Soldiers, bringing a wealth of experience in child bereavement and knowledge of the military community 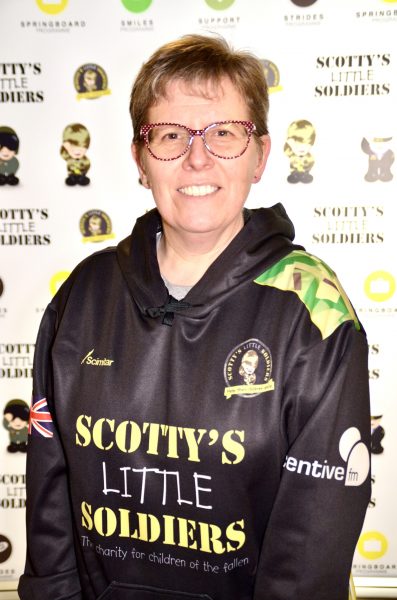 Scotty’s Little Soldiers was founded in 2010 by war widow Nikki Scott, a year after her husband, Corporal Lee Scott, was killed in action in Afghanistan. Nikki saw the devastating impact on their two young children and she set up the charity to help others in the same situation.

Initially the prime aim of Scotty’s was to help put smiles on the faces of children and young people, which continues today through respite breaks for families that need to get away, gifts at extra difficult times of the year and connecting bereaved Forces families through special events, but more than ten years after the charity began, having identified the number of challenges faced by bereaved Forces children, Scotty’s now offers so much more.

If unmitigated, the death of a parent can have a serious long-term negative impact on a child’s self-confidence, relationships, academic attainment and future life chances, and Forces families face additional challenges such as displacement after the death of a serving parent. Having recognised the need of bereaved Service families and providing a wide range of activities to help support those needs, Lorna is joining the Scotty’s team to provide a framework which underpins the support provided through the charity’s Family Programmes, creating a measurable service with clearly defined success criteria, which will evidence the significantly positive impact the charity is having.

Lorna brings a wealth of experience, having worked with children and young people in a variety of settings for over 25 years. She spent over nine years working for the Army Welfare Service as a Community Development Worker, offering front line youth and community support to soldiers’ families. This included creating programmes of activities for children, young people and their families, especially around times of deployment. Lorna went on to specialise in childhood bereavement and for the past ten years she has worked for a Norfolk based child bereavement charity, directly supporting children and young people impacted by the death of a significant person in their lives. Lorna has developed and led many innovative and creative projects to help bereaved children and young people cope with their grief.

“I am really pleased to be joining the Scotty’s team and hope that my specialist skills in childhood bereavement and project development can help strengthen all the good work the charity does supporting bereaved British Forces children and young people.”

“We’ve known Lorna for quite some time and she’s someone we have often gone to for bereavement advice. We are so delighted that she is now part of our team. Lorna is extremely knowledgeable in child bereavement, but she also has a military background, so she couldn’t be more perfect for this role. She’s got so many exciting ideas for ways we can further support bereaved military children and young people, which we can’t wait to start working on.”